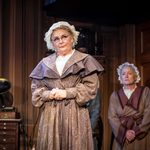 Birmingham Hippodrome are today (Fri 11 Nov) pleased to announce that opera superstar Lesley Garrett will be playing the role of Mrs Pearce in Lerner & Loewe’s critically acclaimed My Fair Lady when it comes to the city next year (Wed 8 Mar – Sun 19 Mar 2023).

Lesley is Britain’s best-known soprano, regularly appearing in opera, musical theatre, concert, on television and CD. For more than 30 years she has enjoyed one of the most successful and idiosyncratic careers of any modern-day, classically trained soprano, winning both critical acclaim and the affection of many fans and music lovers through the breadth and diversity of her work. Internationally Lesley has performed throughout Europe, the USA, Australia, Russia, Brazil, Japan, Malaysia, Taiwan and South Korea.

My Fair Lady tells the story of Eliza Doolittle, a young Cockney flower seller, and Henry Higgins, a linguistics professor who is determined to transform her into his idea of a “proper lady”. But who is really being transformed?

With a book and lyrics by Alan Jay Lerner and music by Frederick Loewe, My Fair Lady boasts a score including the classic songs “I Could Have Danced All Night,” “Get Me to the Church on Time,” “Wouldn’t It Be Loverly,” “On the Street Where You Live,” “The Rain in Spain,” and “I’ve Grown Accustomed to Her Face.”

Adapted from George Bernard Shaw’s play and Gabriel Pascal’s motion picture Pygmalion, Lerner & Loewe’s My Fair Lady premiered on Broadway in March 1956, winning six Tony Awards including Best Musical, and becoming the longest-running musical in Broadway history at the time. Following this success, the production transferred to London in 1958, where it played in the West End for five and a half years.

My Fair Lady has seen many notable revivals and adaptations, including the acclaimed 1964 film starring Audrey Hepburn and Rex Harrison, which won eight Academy Awards, including Best Picture. Most recently on the London stage, Cameron Mackintosh’s 2001 revival at Theatre Royal Drury Lane won three Olivier Awards, and later toured across the UK and Ireland in 2005.

My Fair Lady is on sale now. Tickets can be booked at www.birminghamhippodrome.com or by calling 0844 338 5000*