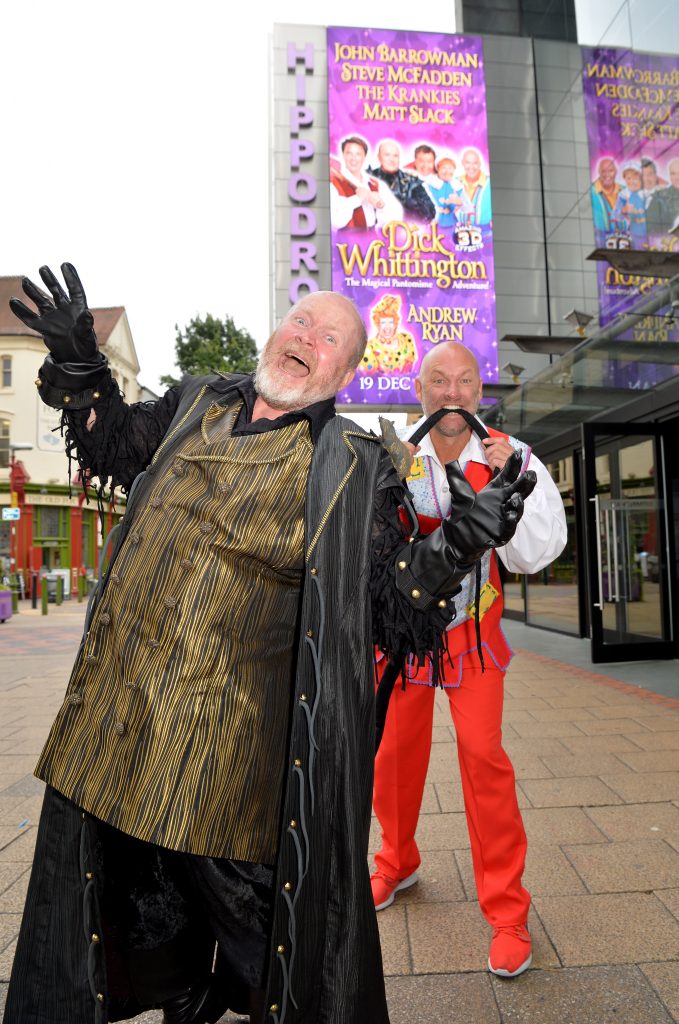 Soap star royalty arrived in Birmingham this week as Britain’s favourite soap baddie, Steve McFadden paid an exclusive visit to the city’s premiere theatre in countdown to the arrival of Birmingham’s biggest panto!

Best known for playing ‘hard man’ Phil Mitchell in the BBC soap opera EastEnders, STEVE MCFADDEN will swap the streets of Albert Square for the sewers of London this Christmas in the role of the villainous King Rat in Dick Whittington, running at Birmingham Hippodrome from Mon 19 Dec 2016 – Sun 29 Jan 2017.

No stranger to pantomimes, Steve’s previous festive roles include Captain Hook in Peter Pan at High Wycombe Swan theatre in 2012/2013 and Abanazar in Aladdin at the Orchard Theatre, Dartford.

Steve was joined for a fairy tale-themed photo call in Southside on Tuesday 27th Sept by fellow panto co-star and friend, MATT SLACK who returns to Birmingham Hippodrome for the fourth consecutive year this year in the role of ‘Idle Jack’.

Steve McFadden said: “I’m really excited to be appearing in panto in Birmingham this Christmas. As an actor and father of five, I’m a big fan of panto and have travelled all over the UK to watch my friends on stage and I can confidently say that Birmingham is home to one of the best pantomimes in the country! I’ve been to see Matt Slack in panto here for the last three years and I always feel such a strong connection with Birmingham audiences. They really know how to enjoy themselves. You can tell they’re up for a great night out from the minute they arrive and that’s exactly what they get! I can’t wait to get started!”

Joining Steve and Matt on stage this Christmas will be Torchwood and musical theatre star John Barrowman in the title role of Dick Whittington. Adding a touch of West End sparkle to proceedings, actress and singer JODIE PRENGER stars as Fairy Bow Bells. She will be joined by legendary comedy duo, THE KRANKIES as Councillor and Jimmy Krankie. Completing the cast and also returning after last year’s appearance in Aladdin is Birmingham’s favourite panto dame ANDREW RYAN, who will don even more of his amazing frocks in the role of Sarah the Cook.

Produced by Qdos Entertainment, the world’s biggest pantomime producer, Dick Whittington will be directed by MICHAEL HARRISON for the fifth year running.

STEVE MCFADDEN joined EastEnders at the beginning of 1990, at the same time as Ross Kemp, who played Phil’s younger brother Grant Mitchell. During that time, his character has been involved in numerous ratings-pulling storylines such as Sharongate (where it was revealed that he had an affair with his brother’s wife Sharon) in 1994, and the most notable Who Shot Phil? storyline in March 2001 where his character was shot and wounded by a mystery attacker. The identity of the attacker was revealed weeks later as Phil’s girlfriend Lisa. As of 2015 he is still in the series and is now one of the longest serving members of its cast.

As a charity with no public revenue funding, Birmingham Hippodrome receives generous support from the business community through sponsorship and other partnerships; from individuals through donations and memberships; and from grant-making Trusts for special programming and infrastructure projects. It is a major employer and plays a leading role in the Southside Business Improvement District. Through Hippodrome CREATIVE we deliver successful projects in education and the wider community.  With numerous supportive partners we have recently co-produced and produced new events including Minimum Monument, The Voyage, Summer in Southside, About Town, Blitz, the 4 Squares Weekender and Birmingham Weekender (celebrating the opening of New Street and Grand Central alongside the Rugby World Cup).