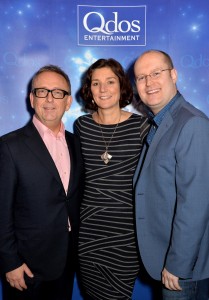 Aladdin marks the 25th pantomime directed by Michael Harrison, Managing Director of Qdos Entertainment’s pantomime division, who commented: “It’s an amazing result and I want to thank the entire cast and crew who worked so hard to make this such a successful show.  The support we get in Birmingham is always astonishing – and year after year the appeal of Panto seems to grow.”

Birmingham Hippodrome’s Chief Executive FIONA ALLAN added: “Given the huge range of high quality seasonal treats on offer across the city, not to mention the demands made on family time, plus digital fun and blockbuster cinema, we’re so grateful people came along to the Hippodrome pantomime to make it such a success.

“I’m so proud of my team here at the theatre working tirelessly across front of house, the bars and restaurant, and the box office at one of our busiest times of the year.”

Box office records show that for 35% of the audience, this was a first time booking to the Hippodrome.  And patrons travelled from across the UK – from Penzance to Glasgow, and from Norwich to the Isle of Man.

Overall, nearly 40% of pantomime tickets were issued at a discounted rate.  In addition to six assisted performances (audio-described, captioned and sign-language interpreted) over 1,200 patrons also attended the theatre’s third Relaxed Performance of panto (made possible through donations and grants), specially designed for those on the autistic spectrum or with a learning disability.

Over the festive period, panto audiences generously donated more than £4,000 to be shared equally between Birmingham Children’s Hospital and Great Ormond Street Hospital’s Children’s Charity.  And January 2016 has seen the highest ever level of patron donations for Hippodrome CREATIVE, the theatre’s growing community and learning programmes, which bookers can support when purchasing tickets.

Dick Whittington, the 2016/17 pantomime, has already been announced and opens on Mon 19 Dec 2016.   Comedian Matt Slack will be returning for his 4th pantomime with further star casting to be announced.  Tickets can be booked now from birminghamhippodrome.com or 0844 338 5000*.