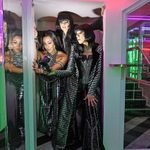 People couldn’t Believe their eyes when not one, but three Chers paid a visit to Birmingham’s Tonight Josephine bar earlier this week. The trio gave the instagrammable bar a run for their money in the glam stakes with their sparkling costumes inspired by the music legend.

The three West End stars are performing in The Cher Show at Birmingham Hippodrome this week playing Cher over her iconic career. Millie O’Connell (SIX, RENT) as BABE, Danielle Steers (Bat Out of Hell, SIX) as LADY and the Olivier Award-nominated Debbie Kurup (Prince of Egypt, The Bodyguard) as the ultimate diva, STAR.

On Tuesday we welcomed media and audiences to the dazzling glitter fest that is The Cher Show, take a look at some of their dazzling reviews below.

“…probably one of the best things touring the UK at the moment with a standing ovation at the end on a level that I don’t think I’ve ever seen before.”

“A powerhouse performance that left you begging for more!”

“I’d have been up for another performance if the cast still had the energy!“

“To say that the three performers (who each play Cher) do her proud is an understatement.”

“This is a ground shaking, booty shaking, finger clicking and toe-tapping show that tingles the spine and tantalises the eyes and ears.”

“Millie O’Connell, Danielle Steers and Debbie Kurup as the three Chers are all vocal powerhouses”

“If you’re looking for a show to watch at the theatre, THIS is the one.”

“With Arlene Phillips directing and Oti Mabuse choreographing, as you might expect, the staging of the musical numbers is top drawer, energetically executed by an excellent ensemble.”

“…it’s refreshing to see a large chunk of Cher’s humour in this musical, along with her songs.”

“Tons of sparkle and sequins, stunning choreography, and 35 hit songs belted out by three powerhouse vocalists in a night of sheer unadulterated joy”

“The script is great, with some moments of real hilarity, and the staging is perfect with dazzling sets, lighting and effects.”