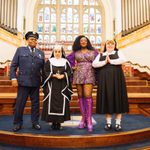 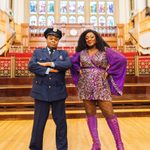 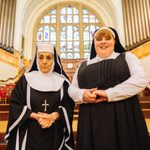 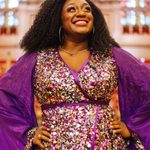 Everyone’s favourite nun on the run Deloris Van Cartier paid a visit to the city’s very own ‘cathedral to learning’ last week, when Sandra Marvin stopped off at the University of Birmingham’s Great Hall.

Sandra was joined by cast members Lesley Joseph, Lizzie Bea and Clive Rowe who are all currently performing in the UK tour of Sister Act which is playing at Birmingham Hippodrome until Saturday 15 October.

The smash hit musical follows Disco diva Deloris whose life takes a surprising turn when she witnesses a murder. Placed under protective custody she is hidden in the one place she shouldn’t be found – a convent! Encouraged to help the struggling choir, she helps her fellow sisters find their true voices as she unexpectedly rediscovers her own.

Featuring original music by Tony® and 8-time Oscar® award-winner Alan Menken (Disney’s Aladdin, Enchanted) and songs inspired by Motown, soul and disco, this heavenly musical is joyous and uplifting in equal measures. A musical sent from above, Sister Act is the brilliant, must-see show which raises the spirits and warms the soul time after time.

Sister Act will run at Birmingham Hippodrome until Saturday 15 October 2022.

Tickets for Sister Act can be booked at www.birminghamhippodrome.com or by calling 0844 338 5000*