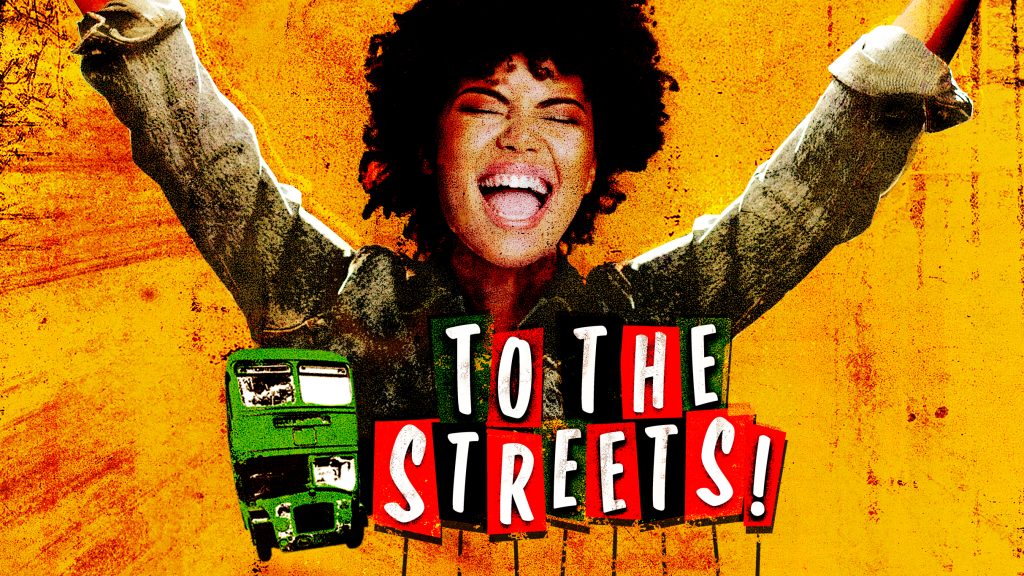 China Plate and Birmingham Hippodrome have revealed the locations for their new concert musical To The Streets!

The special performances will take place at Handsworth Park in Birmingham, Windmill Hill in Coventry (University of Warwick Campus) and West Park, Wolverhampton, in August* as part of the Birmingham 2022 Festival.

To The Streets! is an uplifting new musical by Roy Williams and Tim Sutton inspired by the 1963 Bristol Bus Boycott, a pivotal moment in the UK’s civil rights history. To The Streets! follows the story of Paul Stephenson, an idealistic youth worker who takes to the streets to stand up for equality in Bristol where tensions are running high as the Omnibus Company refuse to employ Black or Asian drivers or conductors. Lorraine, a teenager newly arrived from Jamaica, joins the fight and in so doing, finds her voice and becomes part of a movement that changes history.

Paul Warwick, Director at China Plate said: “We can’t wait to take this special production to parks across the West Midlands this summer. The concert performances will be presented within a festival style experience with additional performances and music to be announced. The music at the centre of To The Streets! is truly uplifting, bursting with ska, calypso and rock ‘n’ roll; absolutely perfect for a summer outdoor performance.”

Chris Sudworth, Director of Artistic Programme at Birmingham Hippodrome said: “The concert musical of To The Streets! will give audiences an opportunity to hear all the songs and enjoy the vibrant choreography from the show ahead of a proposed national tour of the full stage musical, premiering at Birmingham Hippodrome in 2024. To The Streets! tells such an important story in our civil rights history with a huge amount of warmth and heart, it’s set to be a very special production.”

Doreen Foster, Warwick Arts Centre Director, said: “We’re excited to be involved in the development of this pioneering production that tells an important, yet little known, story from Britain’s recent past. We very much look forward to hosting it in the Summer.”

Marguerite Nugent, City of Wolverhampton Council Arts and Culture Manager, said: “Wolverhampton is excited to be part of the Birmingham 2022 Festival by bringing this outstanding musical production to the city for local people to experience. The themes of equality and giving voice to difference have a special resonance in Wolverhampton, which had its own Sikh bus protests in the 1960s. We are looking forward to seeing West Park come alive in August with a burst of toe-tapping music and drama.”

Alongside the production, China Plate’s Associate Producers Aksana Khan, Diandra McCalla and Jade Samuels have been working with communities in North Birmingham to co-design a programme of events inspired by the show that will be presented as part of the Birmingham 2022 Festival.

The first of these projects, On Our Way, kickstarted in October 2021 with the generous support of Transport for West Midlands, National Express West Midlands and the Greater Birmingham and Solihull LEP. Following a series of community workshops, Artist Nilupa Yasmin is converting bus stops along the iconic 74 bus route into galleries on the Soho Road. Celebrating the local people who make up the area, each bus stop gallery is designed by local residents and will reflect the character and soul of its surroundings.

Participatory Artist Jane Thakoordin is working with groups in Ladywood to combine crafts and activism, inspired by the resurgence of political banners for marches. We Still Here will see a series of banners created, reflecting the people in communities who work together to make the world around them better. The banners will be inspired by conversations with residents and the grass roots activism behind the Bristol Bus Boycott. The banners will be displayed in community hubs and at the concert performance sites.

Soho Settlers by Black Heritage Walks Network and Overhear celebrates the vibrant, super-diverse community that calls Handsworth home and will see residents of the Soho Road and Handsworth co-curate new heritage walks of the area. The walks will highlight local heritage and landmarks whilst asking those taking part to consider their own connections to that place. Overhear will lead creative writing workshops to give participants the opportunity to transform their memories into a bespoke collection of audio poems. Using an app, these poems will then be digitally pinned to real-life locations that users can collect by exploring Handsworth and discovering its history of migration.

Aksana Khan, Associate Producer at China Plate Theatre added: “Over the past 12 months, it’s been amazing to work collaboratively and have conversations with local residents and artists. Learning how the historic self-led approach of North Birmingham speaks to the themes of ‘To The Streets!’ has underpinned why our programme isn’t art for art’s sake. It’s about making art with a social purpose.”

Tickets for To The Streets! are on sale now, find out more here.