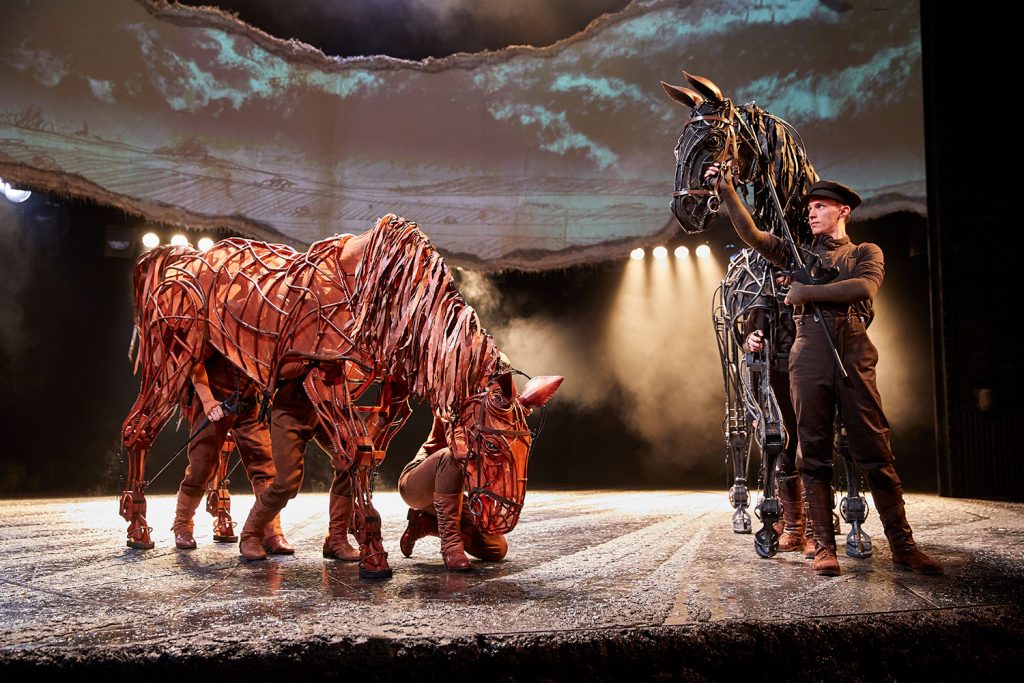 Did you know that the name of our theatre comes from an ancient Greek word for a stadium for horse and chariot racing? Birmingham Hippodrome has therefore had a long association with horses, currently epitomised so brilliantly and emotionally with the current production of War Horse. Last staged here in our record-breaking year of 2013, the production has been seen in 11 countries by over 2 million people.

It was on 9 October 1899 that two Birmingham bookies, James and Henry Draysey, opened here the Tower of Varieties and Circus. On the opening night’s programme were Cliffe Berzac and his Wrestling and Boxing Pony, and the two Clarke Brothers, whom the Birmingham “Owl” journal described as “exceedingly able” bare-back horse riders.

Sadly, the venture failed after five weeks but even in its final week, an “unrideable” donkey was featured, with a £5 prize if you could ride it three times around the circus ring! Undeterred, the Drayseys altered the interior of the building, turning it into a traditional theatre,which they re-opened on 20 August, 1900 as the Tivoli Theatre of Varieties- we became the Hippodrome in 1903. On the opening bill was Felix de Marce with his Performing Baboons and Ponies, and two acts later was his wife Mdlle Irma Orbasany with her “Wonderful Performing Cockatoos”. Imagine the logistics of finding new board and lodgings every week for that menagerie!

In October, 1900 came Paul Sandor and his Miniature Circus, with ” a talking lion on a donkey”. His most famous trick was to juggle a Pony and Trap, a very impressive feat of strength. The following January brought to our stage Boswell’s Novel Stage Circus ” with a splendid stud of educated ponies and donkeys” Edward Sasman in 1902 featured Fox Terriers and a Horse on the stage. The following year, Miss Fredericka showed us her toy terriers and ” Dot”, the world’s smallest pony. 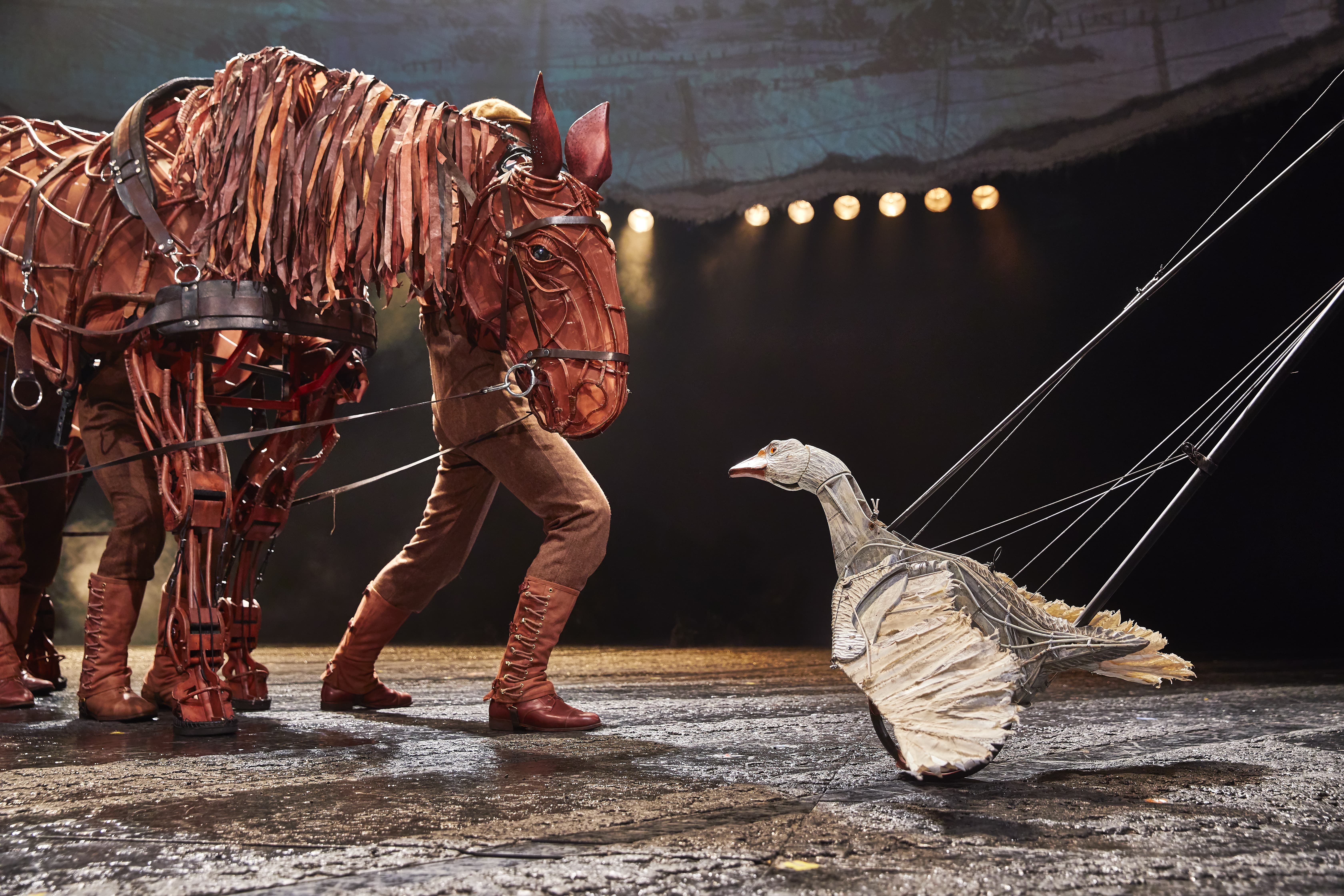 In a hot week in July, 1905, when the air in the Hippodrome had to be cooled with ice blocks, James de Voye displayed ” Billy”, “the Horse with the Human Brain”, who allegedly would paw answers to arithmetical sums and played a game of Snap with cards.

In May, 1903, the Three Eldreds had visited us from America, demonstrating remarkable horsemanship- ” see their original single and double leaps from the stage on to the horse’s back, both to seat and feet; also their great triple spontaneous leaps from the stage to the back of a galloping horse”.

The proprietor of the Hippodrome for its first decade was Thomas Barrasford, who was a great horseman and owned stables. In the early years, the fronts of the theatre programmes were illustrated with paintings of two of his favourite horses- Little Grafton and Bencher.

Even when the Hippodrome had entered the ” Golden Age of Variety” in the 1930s and 1940s, horses still cantered across our stage, often as part of complete circus shows, together with lions, tigers, bears and elephants.In September, 1935, ” Here Comes The Circus” featured Tex Nidley and his Horse, while Albert Jerich brought his Cream Ponies, High School Horse and a team of Liberty Horses. A ” Mammoth Circus” at Christmas, 1945 presented Little Sylvia- the Ballerina on Horseback”, as well as Lou Lenny and his Unrideable Donkey” and Young Roy, “the world’s youngest High School rider”.

Hollywood cowboys brought their horses to the Hippodrome- Tom Mix and “Tony” in 1938 and Roy Rodgers and “Trigger” in 1954. On this occasion, the theatre was full of excited schoolboys, all firing their toy guns with caps at the ” baddie” on stage. Trigger was stabled at M and B’s Cape Hill Brewery and fans gathered every morning to watch him being fed and watered. When the legendary Laurel and Hardy were here in November, 1953, they were preceded on the bill by Derek Rosaire and “Tony the Wonder Horse”.

As recently as 1969, a production of the old musical comedy ” The Arcadians” was planned to feature a show-jumping horse named “Rory” but it was discovered that he was too big to fit back-stage and the idea had to be dropped. 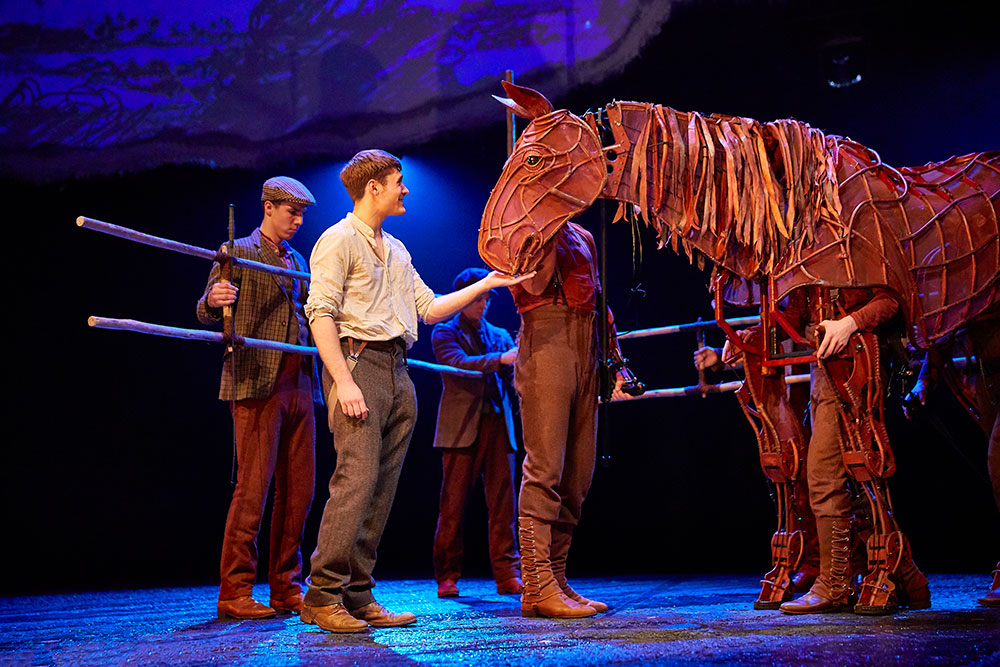 In 1988, a production of ” Joseph and the Amazing Technicolor Dreamcoat” included Cecil the Donkey, whom our Stage Door Manager, a younger Tom Phipps(!), had to rescue from
being held up in City Centre traffic. He had to guide Cecil through the nearby streets to get him here in time for the matinee.

And we must nor forget the wonder on the faces of children when they see Cinderella’s coach being pulled by enchanting white ponies, taking her to the Ball. Ian Lucker’s Ponies
filled this role in our 2006/2007 Cinderella, which starred Brian Conley.

A postscript- in the old days of weekly Variety, the artistes’ props, scenery and stage equipment had to be transported by horse and cart to and from New Street Station to the Hippodrome- late on Saturday nights and early on Monday mornings. There were times when, as the Queen of the Music Hall Marie Lloyd used to sing, ” I wanted to go to Birmingham but they put me off at Crewe” and things got ” mislaid”!

So, War Horse, as well as reminding us of the important work that horses did in WW1, also makes us think of the place of horses in the daily lives of the early 20th century, in transport
and distribution- not to mention their important role on our stage entertaining the people of Birmingham.

On Wed 31 Oct Ivan will be hosting a free talk on the theatre during WW1 – to book book your place click here.

For more information on War Horse and to book tickets click here.