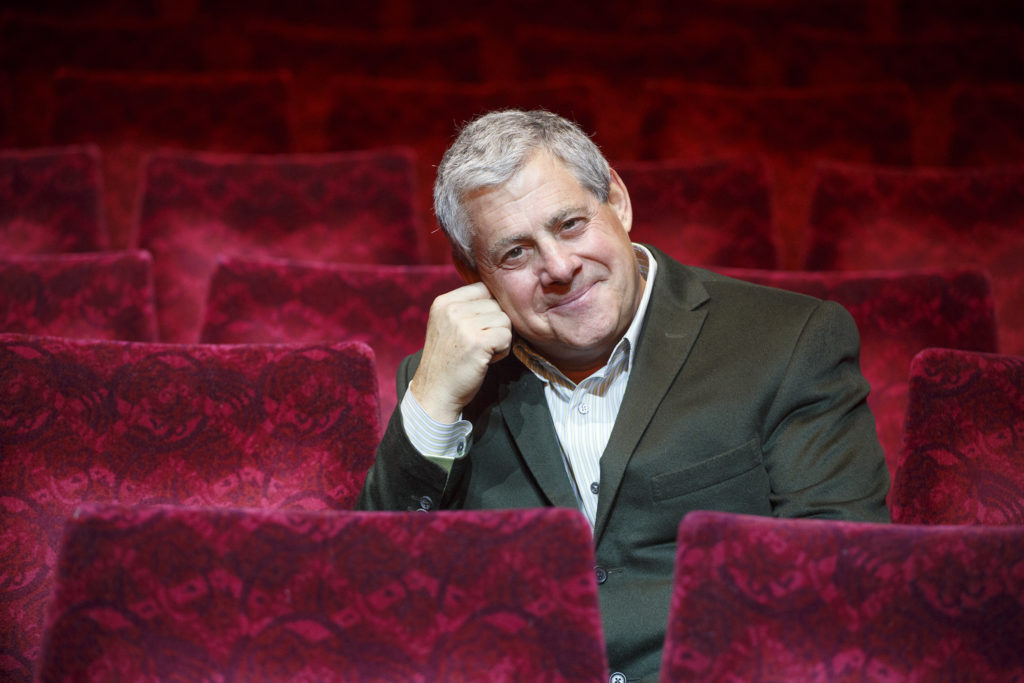 In a year that marks Sir Cameron’s 50th anniversary in producing, Hippodrome Heritage Volunteer Ivan Heard has been looking back over some of the incredible productions Cameron has brought to Birmingham across the years. From Mary Poppins to Les Miserables right through to our 2017 summer blockbuster Miss Saigon…it’s no wonder that Sir Cameron is widely recognised to be one of the most influential and successful theatre producers of all time!

Sir Cameron Mackintosh this year celebrates 50 glorious years of theatre production. Many of his shows have graced the Hippodrome’s stage since the first, “Salad Days” in 1972, right up to this summer’s blockbuster “Miss Saigon”. He has been described as ” the most successful, influential and powerful theatrical producer in the world”.

Born on 17 October, 1946, at the age of eight he was taken by an aunt to see the original Vaudeville Theatre production of “Salad Days”, a small-scale intimate and thoroughly English musical by Julian Slade and Dorothy Reynolds. He recalls running down the theatre aisle to chat to Julian Slade, then playing the piano in the orchestra pit – he showed Cameron how the “magic” piano worked and from then on the lad was smitten by the stage.

Leaving school at 17, Cameron attended the Central School of Speech and Drama but left half-way through because he wanted a more hands-on experience of the theatre. He was taken on by the Theatre Royal, Drury Lane as a stage-hand, even volunteering to clean the foyer and polish the circle brass! In 1965 he joined the touring cast of “Oliver!” as Assistant Stage Manager and also found himself on stage as one of the singing and dancing Londoners, even though he described himself as ” really quite terrible”. However, this musical remained close to Cameron’s heart and he later revived it on tour. It first played the Alexandra Theatre in 1977 and came to the Hippodrome in May, 1983, starring Roy Hudd and Jimmy Edwards. A version by the Birmingham and Midland Operatic Society in 1990 featured a 12-year old English bull terrier from Quinton as Bill Sykes’ dog “Bullseye”.

Back in the mid-1960s, Cameron Mackintosh set himself the target of becoming a producer in five years- he achieved it in less than three! His first venture in 1967 was to stage a season of plays, followed by tours of Agatha Christie favourites. His production of “A Man and His Wife” came to the Alex in 1969.

His first musical, “Anything Goes”, was put on when he was 23 and it was his first big flop. However, he learned many valuable lessons from this experience and, undaunted, he negotiated a deal with one of the West End’s most influential managers, Michael Codron, to tour some of his hit London plays, several of  which were staged at the Alex.

After Cameron’s first Hippodrome production, ” Salad Days” in 1972, his next show on our stage marked an important landmark in the history of regional theatre in Britain. “Oliver” had always been one of his most favourite shows and its 1977 tour had been highly successful. He had mounted a full replica of the original production, with no trimming or lack of quality because it was touring ( as had very often been the case when West End shows left London for the provinces). “Oliver!” had helped to keep many venues open at the time when Moss Empires were off-loading their big city centre theatres. In 1979, they sold the Hippodrome to Birmingham City Council for £50,000, who leased it to the Hippodrome Trust which continues to run it today.

Against this background, the Arts Council made a highly significent decision to back Cameron Mackintosh’s plan to stage top quality revivals of iconic musicals, not for London but for the regions. Some of their critics opposed this financial backing of the commercial theatre but it more than paid off.

Accordingly,in 1979, Cameron launched a newly designed ” My Fair Lady” that still managed to keep the spirit and high quality of the original. Opening at the Hippodrome on 20 February, it starred Birmingham-born Tony Britton, Liz Robertson and Dame Anna Neagle. It was big, lavish and beautifully costumed. (BHIPP; 2016.53).

To add to the opening night atmosphere, a flower stall was set up in the foyer and outside the Hippodrome in Hurst Street there was a hot potato and chestnuts wagon. Cameron Mackintosh, present at the opening, heard about it and ordered hot potatoes and chestnuts for the cast, crew and staff. Queues stretched around the block and extra supplies had to be brought in. As the audience were leaving, a Cockney flower seller offered her “luverly violets” for sale. Quite a night!

Cameron’s continued association with the Arts Council in 1980 brought to the Hippodrome a spectacular revival of “Oklahoma!”. But, around this time, he was also beginning to forge another association- this time with Andrew Lloyd Webber., who had already had a string of hit musicals, including “Joseph and the Amazing Technicolor Dreamcoat”,”Jesus Christ Superstar” and ” Evita”. Cameron was looking to do an original new musical and Andrew’s enthusiasm to stage a show based on T.S.Eliot’s ” Book of Practical Cats” came just at the right time.

Opening to acclaim at the New London Theatre on 11 May, 1981, “Cats” was to make all those involved in its production millionaires and to set new records for performances. It was first staged at the Hippodrome between March and June,1995.

“Cats” brought in new audiences, and with Cameron Mackintosh devoting detailed attention to every stage of production, including branding, advertising and merchandise, it cemented the success of the British “mega-musical”. Andrew Lloyd Webber had initiated the trend towards bigger, more spectacular musicals that had gone on to overseas success but, with Cameron on board, these hits shows went global on a never-before-seen scale for a British musical.

A smaller Andrew Lloyd Webber double-bill, ” Song and Dance”, with Marti Webb and Wayne Sleep, arrived at the Hippodrome in 1984, once again produced by Cameron Mackintosh.

The next mega-musical was “Les Miserables”, not this time with Andrew Lloyd Webber, but with two unknown composers- Tunis-born Alain Boublil and Frenchman Claude- Michel Schonberg. Cameron had heard the concept album and he knew he wanted to be associated with it. His involvement produced a show that re-defined the musical theatre- it was sung-through like an opera and it tackled huge themes on a sweeping scale. It was not upbeat or glamorous- quite the opposite- but it was to take audiences on a roller-coaster of emotions. After a very uncertain start at London’s Barbican, it opened at the Palace Theatre at the end of 1985 and another world-wide triumph was on its way to becoming voted ” the world’s favourite musical”. After over 30 years it is still running in the West End. It first came to the Hippodrome from June to September, 1997.

Even while Cameron Mackintosh was ensuring the success of “Les Miz”, his boundless energy was working back with Andrew Lloyd Webber:  “The Phantom of the Opera” was to become another worldwide mega-hit. Opening on 9 October, 1986 at Her Majesty’s Theatre, again over 30 years later it is still there, remarkably at the same theatre. It came first to the Hippodrome in 1998, ensuring sound finances for us! What an historic period in our history, with two of the world’s biggest musicals coming onto our stage within two years. However, “Phantom” was to be Cameron’s last collaboration with LloydWebber. The team had made the British mega-musical. Cameron returned to the composers of ” Les Miz”, who were now working on a re-interpretation of Puccini’s opera “Madam Butterfly”.  The emotional whirlwind of ” Miss Saigon” landed at the Theatre Royal, Drury Lane on 20 September, 1989- the very place where Cameron had begun as a stage-hand. The big four mega-musicals were now running simultaneously in the West End and on Broadway. What an achievement! “Miss Saigon” was first staged at the Hippodromein the summer of 2003.

Boublil and Schonberg’s next collaboration with Cameron Mackintosh, “Martin Guerre” was not as successful – it was here in May, 1999. Subsequently, Cameron returned to revivals of classic musicals, often in association with the National Theatre. “My Fair Lady” was one of them, returning to the Hippodrome in 2005

Cameron’s next big musical had been simmering for many years. In 1993, he finally worked his charm on P.L.Travers, the author of “Mary Poppins”, who entrusted him with producing a stage version of her books. She had hated the Walt Disney film in 1964 but maybe she was charmed in the end by Cameron presenting her with a cherry tree- after all, the Bankes family did live in Cherry Tree Lane!  This great family musical landed at the Hippodrome first in 2008, making a very welcome return in 2016.

There have been so many Cameron Mackintosh productions in the last 50 years and this has just been a skim over the major ones. Not only has he become the world’s most famous and successful producer of popular shows but he has also established the Mackintosh Foundation, with a Chair of Drama at Oxford University, which also funds a range of charities and helps to develop young musical talent for the future. He now owns nine West End theatres- the Prince of Wales,Gielgud,Queen’s,Wyndham’s, Noel Coward, Novello, Prince Edward, Ambassadors and the Victoria Palace.

Cameron’s influence on British musical theatre has been immense and prolific. He has secured the double – not only producing international hit shows but also helping to sustain a healthy regional theatre in our major cities. He has been a stickler for quality, right down to the last detail of merchandise, branding and ticket sales. Modestly, he once said “producers can’t instigate shows: they can only hope to find good material and make it better”. He has most certainly achieved that.

Cameron Mackintosh, colossus of British theatre, the Hippodrome salutes your 50 years and looks forward to staging many more of your shows.