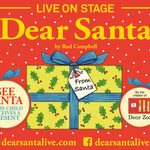 We have recently announced even more spectacular new shows for our new season. We can’t wait to welcome you all home for live performance at the Hippodrome.

The new productions join the previously announced The Cher Show, The Play That Goes Wrong, What The Ladybird Heard and the National Theatre’s Curious Incident of the Dog in the Night-Time.

Jimmy Carr will be coming to Birmingham Hippodrome for one night only on Sun 10 Oct to celebrate the release of his brand-new book Before and Laughter: A Life Changing Book.

Also new on sale is Dear Santa, from the author of the well-loved children’s book Dear Zoo, Rod Campbell. This charming family show is an ideal introduction to theatre for those aged 2+ and will run at the Hippodrome’s Patrick Studio Wed 15 – Fri 24 Dec.

Following a triumphant sold-out season in 2019, and currently the hottest ticket in town this summer at The London Palladium the sensational brand-new production of Joseph and The Amazing Technicolor Dreamcoat comes to the Hippodrome for just two weeks in April 2022. The multi award-winning show has been performed in over 80 countries worldwide including multiple runs in the West End and on Broadway and has become one of the worlds most beloved family musicals.

We re-open for live performance on Monday 30 August with the joyous, award-winning musical Priscilla Queen of the Desert. Tickets for all productions are on sale now.