Celebrating life, love and the strength to stand up for who you are 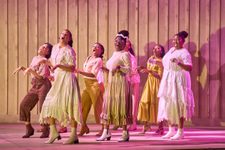 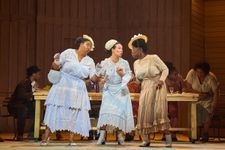 Based on the Pulitzer prize-winning novel by Alice Walker and adapted for the stage by Pulitzer Prize and Tony award-winner Marsha Norman, The Color Purple tells the story of courageous heroine Celie, as she journeys through joy, despair, anguish and hope in her own personal awakening to discover her unique voice in the world.

Winner of Best Regional Production (WhatsOnStage awards), the critically acclaimed Birmingham Hippodrome and Made at Curve production is a moving and soul-raising family chronicle set in racially divided southern America in the 1900s.

As the years go by, abused and oppressed Celie becomes resigned to her unfortunate lot in life, but when her friendship with fiercely independent Sofia and love affair with glamourous singer Shug start to shake things up, she begins to question her world; and understand that there must be more to life.

With a profoundly evocative score by Grammy award-winners Brenda Russell, Allee Willis and Stephen Bray and drawing inspiration from jazz, ragtime, gospel and blues, this landmark musical celebrates life, love and the strength to stand up for who you are and what you believe in.

A Curve and Birmingham Hippodrome Production

BASED UPON THE NOVEL WRITTEN BY ALICE WALKER AND THE WARNER BROS./AMBLIN ENTERTAINMENTMOTION PICTURE

Approximately 2 hours 30 minutes including one interval

14+. This show contains themes of rape, abuse, incest, overt racism and sexism.

CLAIMANTS, UNDER 16s, OVER 65s AND PASSPORT TO LEISURE

£10 off price band A-D, all performances

“…powerful, empowering and packed with emotion…The Color Purple is the kind of show that leaves you speechless for a little while”

“The Color Purple is simply sublime: a story of female empowerment at its very finest”