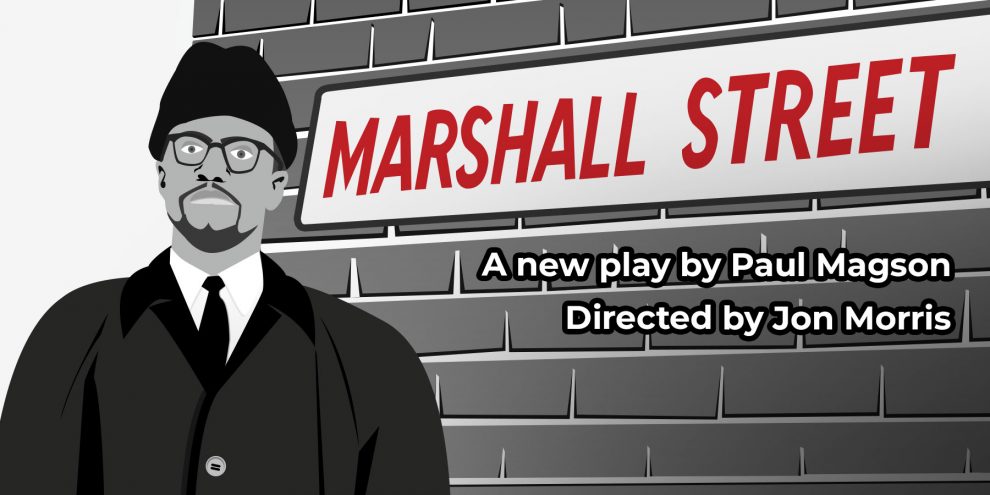 See a preview of a new play about the visit of Malcolm X to Smethwick.

Tickets for this production are now fully booked. Returns may be available, please call Ticket Sales on the day of the performance.

It’s 1965 and Britain is caught up in the euphoria of the Swinging Sixties. The time of the Space Race. The Beatles. The Miniskirt.

Yet racial tensions are at breaking point.

In Smethwick, a campaign mounts to keep Marshall Street ‘white’. The Conservatives take the local seat with the campaign slogan “If you want a n****r for a neighbour, vote Labour.”

The Indian Workers Association reaches out to Malcolm X, who, disturbed by reports, comes to see for himself. 9 days later, he is assassinated in New York.

As we grapple with Brexit, Boris, Trump, hate crime and ‘fake news’, Marshall Street invites us to reflect on this explosive moment in our recent history. And urges us to ask the question – has anything really changed?

“I have heard that colored people are being treated as Jews were under Hitler. I would not wait for the fascist elements in Smethwick to erect gas ovens.” – Malcolm X

This production will be held in our PwC Suite.

Prices and discounts are subject to change. Postage from £1.50.

Please note: The play at this stage is a fully rehearsed professional cast and professional Director, with a sound design and basic costume design. It does not have a full set or a lighting design. This is a preview performance with a view to future development and touring.

There will be a post show talk after the performance led by the writer and director.