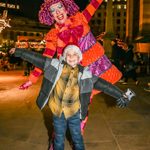 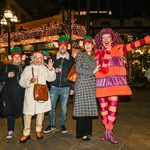 Birmingham Hippodrome’s very own Pantomime Dame Andrew Ryan brought some festive magic to the city when he helped light up Cathedral Square yesterday evening (16 November), at the official lights switch on for Christmas in Cathedral Square.

After taking some time to take in the delights of the market and meet some local panto fans, Andrew was joined on stage by Brummie celebrity Chef Glynn Purnell for the switch to officially open the market, which offers a variety of crafts, gifts and food and drink stalls from local independent businesses, running until Sunday 18 December.

Andrew is back for his sixth year at the Hippodrome, playing the role of Felicity Fitzwarren in the ultimate pantomime adventure Dick Whittington.

The production follows Dick Whittington and his trusty cat as he seeks fame, fortune, and happiness journeying to become the Lord Mayor in an action-packed adventure full of laughter, music and dance.

Featuring sets and costumes from The London Palladium, spectacular special effects and plenty of audience participation, Dick Whittington is the perfect chance for audiences to come together and share the magic of live theatre.

Andrew will be joining one Britain’s most celebrated stars Marti Pellow as The Ratman, Birmingham Panto favourite Matt Slack as Dick Whittington, TV Doctor and presenter Dr Ranj as Spirit of the Bells and musical sensation Suzanne Shaw as Alice and Birmingham favourite Doreen Tipton as Doreen the Cat.

Dick Whittington will run at Birmingham Hippodrome from Saturday 17 December 2022 and will play until Sunday 29 January 2023.