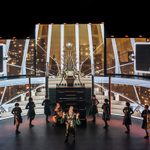 Earlier this week we invited Birmingham media and audiences to the worldwide smash hit musical We Will Rock You, and the show truly rocked the Hippodrome stage.

Read the reviews of this Kind of Magic production below…

“It’s a sure-fire hit, a tap your feet, clap along, wave your arms journey down memory lane and through the back catalogue of supergroup Queen.”

“The duo of Ian McIntosh as Galileo and his leading lady, Scaramouche, played by Elena Skye is simply outstanding. Vocally incredible, the chemistry, punctuated by Skye’s deadpan humour, is absolutely spot on and makes for compelling viewing.”

“If you think you know the show because you’ve seen it before – think again. Yes of course it’s still a jukebox musical but it’s now so much cleverer.”

“This whole show is an explosion of pop and rock culture onto the Birmingham stage as it glides through the brilliant and extensive back catalogue of Queen, shoehorning hit after hit after hit into the narrative.”

“It is full of silliness with some hilarious punchlines thanks to the comedy talents of writer Ben Elton, and although the storyline is truly bonkers it is a lot of fun.”

“The singing talent in this show has to be seen and heard to be believed.”

“Still a worthy Champion after twenty years…. top of the league.”

“The performances by the outstanding live band had the room thumping, and the energy of the actors was spot on”

“…a captivating plot, that has you gripped to the stage.”

“A dazzling extravaganza of musical talent, choreography and passionate performances. We Will Rock You at Birmingham Hippodrome is the show to see this season.”

“If you’re a Queen fan and haven’t had chance to see the show yet, catch it while it’s on tour. Great stuff.”

“There’s a big guitar riff leading up to the finale, which is a sure-fire way of sending everyone home with a smile on their face and Bohemian Rhapsody is a majestic close to this popular show.”

“20 years after its debut – this thrilling show, which includes hit after breath-taking hit, definitely still packs a punch.”

Guaranteed to blow your mind, this musical phenomenon is not to be missed. We Will Rock You runs until Sat 30 July 2022, click here for more information and tickets.