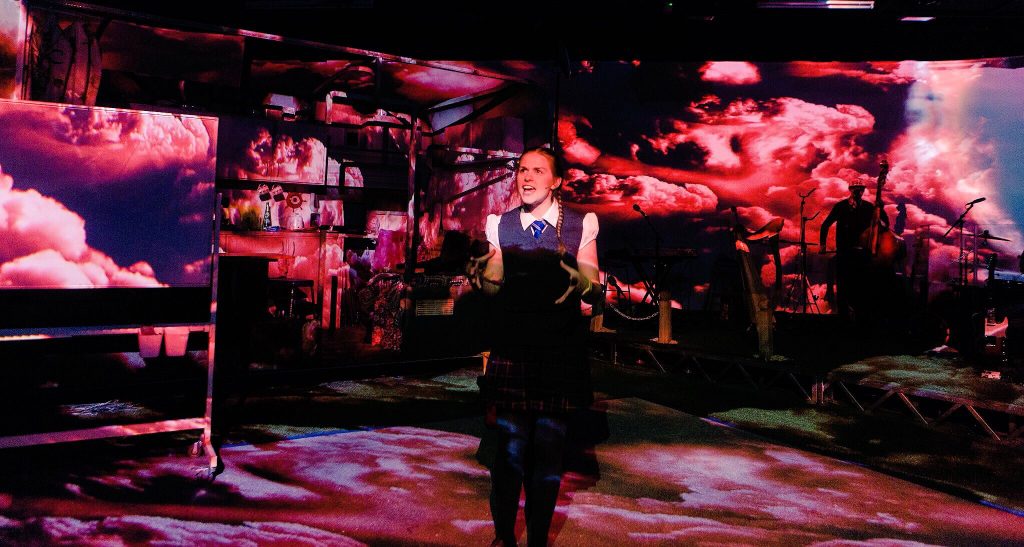 When theatre director Geinor Styles was developing her latest musical play for south Wales theatre company, Theatr na nÓg, she stumbled upon a problem. Her main character in Eye of the Storm – touring UK theatres this autumn – is a 14-year-old called Emmie who dreams of chasing tornadoes in the USA. Styles wanted Emmie to invent something that harnesses the energy from a tornado, an invention which helps her realise her ambition in the story. “It needed to be something so fantastical that it didn’t exist yet, but it also had to be something factually possible too,” she recalls. “As soon as I researched this, Louis Michaud’s name came up again and again.”

Canadian engineer Louis Michaud has been working on artificially creating tornadoes and then utilising their power for over 40 years. It’s a line of enquiry he hopes will eventually lead to drastically reducing carbon emissions in the production of electricity. “A large hurricane produces more energy than all the electricity we produce in a year,” Michaud says, “so if we can produce a number of small tornadoes, then effectively we could produce our electricity without any greenhouse gas… We can produce clean energy.”

Louis Michaud is the epitome of the obsessive inventor with a gentle, almost professorial air. He has toiled over his idea for decades in his spare time while working as an engineer at his local oil company, only committing to it full-time when he retired.

Eventually, in 2012, Michaud received a grant of $300,000 to build a large-scale prototype of what he calls his Atmospheric Vortex Engine (AVE) in his hometown of Sarnia, Ontario. “We don’t like to use the word tornado because it scares people!” he smiles. The AVE is a chimney tower in which a tornado, or vortex, is artificially generated using heat at ground level and then turbines that push the air upwards. “To produce a vortex, you need two things: you need warm air that has the potential to be buoyant as it rises, and you also need rotation.”

“I read about Louis and his invention online,” Geinor Styles remembers, “and my first thought was to contact him to tell him what we were doing. I didn’t want him to think we were stealing his idea! I found his e-mail address, never expecting a response – but then he got back to me really quickly and we got talking about it. He was really onboard.”

What was Michaud’s reaction when a Welsh theatre contacted him to discuss using his project within their musical? “I thought it was wonderful,” he smiles. “Geinor had picked up on the idea of the vortex engine, and really understood what I was trying to achieve, and so I was delighted to co-operate on it. It was a real pleasure.”

Michaud’s Atmospheric Vortex Engine would become an integral part of Styles’s play, with the engineer acting as consultant and eventually flying from Canada to see the premiere.

Eye of the Storm originally opened in 2017 (it will tour again this autumn across the UK). It’s an uplifting musical with songs by Grammy-winning songwriter Amy Wadge, but it delivers some powerful messages. The story’s hero, Emmie, is a young carer looking after her mother in a caravan park in Aberdare in south Wales. She is striving to realise her lofty ambitions while struggling to take care of things at home.

When Louis Michaud saw the play, though, he immediately made an observation that resonated with Styles, inspiring her to rewrite parts of the script. “Originally, all we wanted was for Emmie to be a girl with big aspirations, who invents something to do with extreme weather systems,” says Styles. “It was only when Louis Michaud told us that what we’ve done is create a climate change musical, that we realised how important that aspect was. Since 2017, those issues have become a huge priority for us all, and so we’ve tweaked a lot of the things about that. Emmie realises that what she does could change the world.”

Michaud remembers that first night. “It was very enjoyable. I liked the story and the theme of the teenage carer, but it was also about how young people can really change things. And I loved how the play is encouraging girls to pursue their studies in science.”

Geinor Styles agrees: “That’s always been a big driver of this play, from discussions with teachers saying they’ve got a real problem of girls dropping out of the STEM subjects in school.” The lead character in Eye of the Storm eschews the depressing statistics of females being under-represented in the STEM (Science, Technology, Engineering and Maths) subjects in our schools, a trend that is unsurprisingly reflected beyond education (women made up just 14.4% of the STEM workforce in 2018). “We had a young carer in last week and she wants to study medicine. I asked why she did, and she said it’s because it’s factual, it’s right, it’s truth. I think that’s really interesting, especially from a theatre point of view, as we try to present truth on stage – but the fact that we’ve got these girls who can see what truth really is, is brilliant.”

Perhaps perceptions are finally changing, with the world’s most celebrated climate activist currently being a teenage girl. “I just read the last script of the play (for the touring version) and Geinor makes a reference to Greta Thunberg which I think is brilliant,” says Michaud. “And one of the things that Greta says is that although it’s the young people who need this and need to act, they still have to get the older people with the experience and the knowhow to help… And so, I hope I can do my bit to support that.”

The ethos behind Eye of the Storm led to Theatr na nÓg finding itself at the vanguard of art and science. OISTAT is a global network of specialist theatre makers who are interested in the unlimited possibilities of technology in design, and they invited the company to showcase its on-stage tornado – inspired by Michaud’s Atmospheric Vortex Engine – as part of its 50th anniversary celebrations. A demonstration was given to stage design students at the Royal Welsh College of Music and Drama who then explored ways of replicating Michaud’s tornado in front of an audience.

Theatr na nÓg was then invited this year to present the play in Hong Kong as part of the British Council’s SPARK: The Science of Art and Creativity festival. It was heralded by organisers as epitomising how art and science can co-exist to project important messages to audiences. The team was joined in Hong Kong by Technocamps, an organisation that delivers workshops in programming, coding and app and games development to young people across Wales, further cementing the relationship between art and science and technology.

The company’s commitment to encouraging young people to engage with STEM subjects continues closer to home. The team recently collaborated with primary school children from in and around Swansea to create an original new app. Their extraordinary creation is now available through the App Store and Google Play and provides interactive activities, classroom challenges and behind the scenes content to inspire school projects linked to topics such as climate change, inspired of course by Emmie’s story in Eye of the Storm.

Geinor Styles recognises the responsibility the company has: “To get more young people to be inquisitive and curious about the world but, importantly, for the older generation to support them, is so important. We want young people – and yes, especially girls – to see science as being as worthy as any other subject matter and as being a real career choice. It’s so important we support these young people in these choices they might want to make. If we could stimulate a young girl into thinking she can actually save the planet and truly change something, then that would be job done for me!”

With Eye of the Storm set to tour Wales, England and Scotland during the next two months, it’s hoped that the show’s messages can be carried far and wide. “The play is for enjoyment and is wonderful entertainment,” says Michaud, “but we also hope it presents a scientific solution with the Atmospheric Vortex Engine that needs to be considered. We hope people who see the play might begin to think about it as a possible solution.”

Albert Einstein once said that all arts and sciences are branches of the same tree, ideas in both disciplines born out of creativity. Theatr na nÓg is attempting to show how one of these branches might benefit the other, something Louis Michaud recognises: “Getting the theatre to present an idea is very important. People are somewhat afraid of science, so to tell a story about it is great in getting the message across. Theatre helps people with the relevant knowledge to be listened to.”