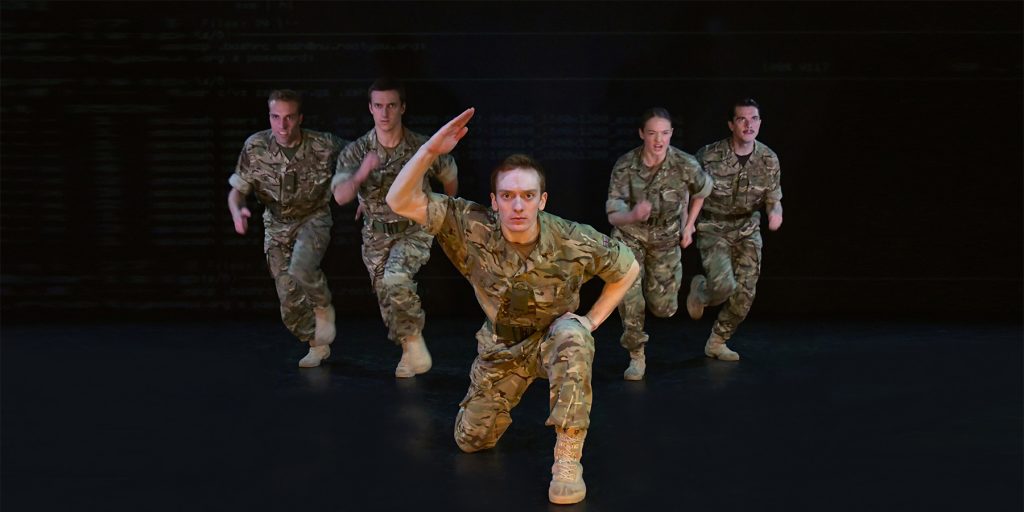 Birmingham Hippodrome and Associate Company Rosie Kay Dance Company announce an exciting opportunity to be part of a unique performance on Tuesday 21 May.

The choreographer of the Commonwealth Games Handover – broadcast from Birmingham city centre around the world last year – is once again calling for West Midlands residents to get involved in a large-scale dance performance. Produced as a collaboration between Rosie Kay Dance Company and the local community, 120 SOLDIERS will mark the premiere of 10 SOLDIERS, a key production within Birmingham Hippodrome’s 120th anniversary year.

Choreographer Rosie Kay comments, “I’m thrilled to be able to present another opportunity for people from all backgrounds to come together and create a public performance. The West Midlands has such strong enthusiasm for dance but to keep this scene fresh and engaging, we need to continually open it up for different communities to get involved. I hope to see youth groups, students, parents, local workers getting involved, but I also want to see cadets, soldiers, ex-services and those with a connection to the Armed Forces. 10 SOLDIERS is all about building a greater understanding between the public and The Army, developing connections and trust within a diverse group, working together as a team, cementing friendships and an empathetic, supportive network. Hopefully, 120 SOLDIERS can give people the opportunity to experience how participating in dance can help us do these things.”

This opportunity is open to everyone aged 16 and over, regardless of previous dance experience. Participants will need to commit to a rehearsal on Sunday 19 May from 10am-4pm and Tuesday 21 May from 5pm-9pm at Birmingham Hippodrome.

Participants will receive a free t-shirt and ticket to see the main show of Rosie Kay Dance Company’s 10 SOLDIERS, taking place in the main auditorium on Tuesday 21 May at 7.30pm. The show comes a decade after Rosie Kay’s initial research into The Army which developed into her best known and highly regarded 5 SOLDIERS. Commissioned by Birmingham Hippodrome, 10 SOLDIERS explores what it is like to be a soldier in today’s British Army, the friendships and relationships that develop, the physical and psychological transformation that soldiers experience, and ultimately how a tightknit group is formed that are prepared to face anything.

Chris Sudworth, Associate Director (Programme & Artist Development), comments: “Rosie Kay’s 5 SOLDIERS has been an international hit production, made in Birmingham. We are delighted that Rosie’s debut at this scale will be on the Main Stage of Birmingham Hippodrome, in her home city before touring nationally – and we hope internationally. We’re also delighted that Rosie will work directly with non-professional dancers to make this exciting pop-up performance on the night of the world premiere. We can’t wait to make more surprising and exciting projects with the people of our city across our 120th anniversary year.”

Applications to participate in 120 Soldiers close on Friday 29 March 2019. To apply, complete the form here.