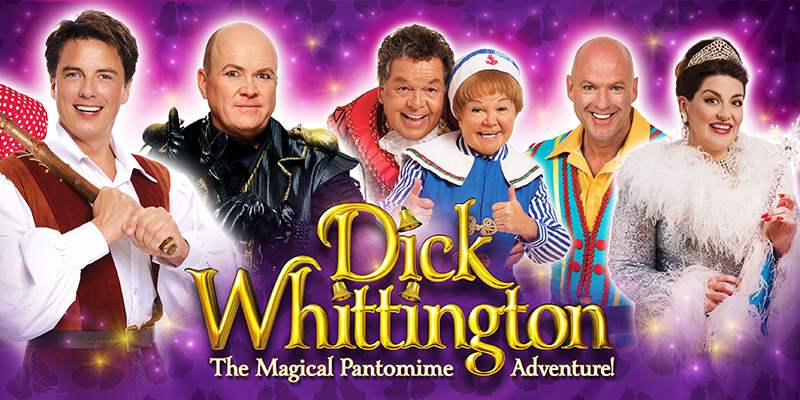 This year’s festive extravaganza will see legendary showman and star of Doctor Who and Torchwood, JOHN BARROWMAN take on the title role of Dick Whittington in a magical new production directed by Michael Harrison which runs from Monday 19 December 2016 to Sunday 29 January 2017 at Birmingham Hippodrome.

Joining John on stage this Christmas will be Britain’s favourite soap star ‘baddie’ STEVE McFADDEN in the role of the dastardly King Rat and legendary comedy duo, THE KRANKIES as Councillor and Jimmy Krankie. Back for a fourth year running, Hippodrome favourite MATT SLACK returns to make Birmingham audiences roll in the aisles with his hilarious physical comedy and quick wit in the role of Idle Jack. Adding a touch of West End sparkle to proceedings, actress and singer JODIE PRENGER stars as Fairy Bow Bells. Completing the cast and also returning after last year’s appearance in Aladdin is Birmingham’s favourite panto dame ANDREW RYAN, who will don even more of his amazing frocks in the role of Sarah the Cook.

Produced by Qdos Entertainment, the world’s biggest pantomime producer, Dick Whittington will be directed by MICHAEL HARRISON for the fifth year running. Michael, also the producer behind Birmingham Hippodrome hits The Bodyguard, Annie and Barnum said: “Once again we are delighted to bring together a sensational cast of talented performers for Birmingham Hippodrome’s pantomime, which – as always – will be a spectacle on a par with any West End show in terms of scale.”

Fiona Allan, Artistic Director and Chief Executive at Birmingham Hippodrome said: “We are hugely excited to be working with Qdos again to bring audiences such a fantastic line up of stars for Dick Whittington. It’s never too early to be planning Christmas fun – sales are already set to break records – and this year’s pantomime promises plenty of laughs, outrageous costumes and special effects to amaze all the family.”

As a charity with no public revenue funding, Birmingham Hippodrome receives generous support from the business community through sponsorship and other partnerships; from individuals through donations and memberships; and from grant-making Trusts for special programming and infrastructure projects. It is a major employer and plays a leading role in the Southside Business Improvement District. Through Hippodrome CREATIVE we deliver successful projects in education and the wider community.  With numerous supportive partners we have recently co-produced and produced new events including Minimum Monument, The Voyage, Summer in Southside, About Town, Blitz, the 4 Squares Weekender and Birmingham Weekender (celebrating the opening of New Street and Grand Central alongside the Rugby World Cup).