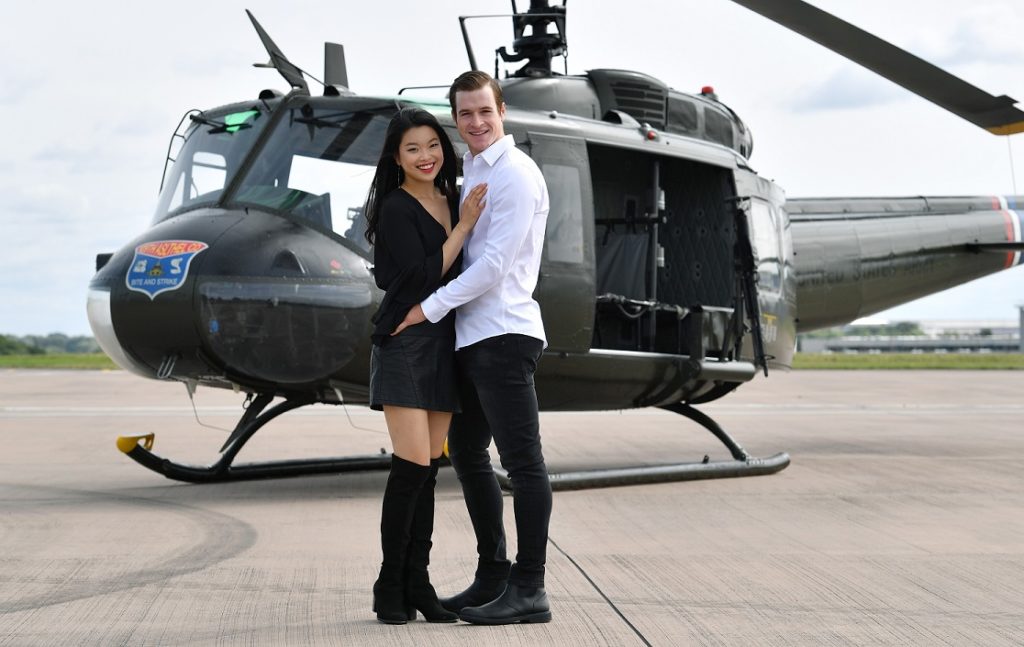 With the West End and Broadway blockbuster, Miss Saigon, currently thrilling audiences on the Main Stage at Birmingham Hippodrome until Sat 23 Sept, principal cast members Sooha Kim and Ashley Gilmour took time out from their busy performance schedule for an up-close encounter with an original Vietnam UH-1 HUEY helicopter, the only working model of its kind to exist in the UK today.

Widely used to transport troops and equipment during the Vietnam War, as well as support and attack missions, the UH-I model ‘Huey’ helicopter first arrived in Vietnam in 1963 and was the most common utility helicopter used in the conflict between 1965-1973.

The Huey 509, was contracted by the US army in 1972. The aircraft saw active service in the Vietnam conflict between 1972-1973, where it flew over 500 combat missions with the 129 Helicopter Assault Company.

Winner of a record-breaking nine Whatsonstage awards including Best show, Miss Saigon tells the story of the last days of the Vietnam War, in which a 17 year-old Kim is forced to work in a Saigon bar run by a notorious character known as the Engineer. There she meets and falls in love with an American GI named Chris but they are torn apart by the fall of Saigon. For 3 years Kim goes on an epic journey of survival to find her way back to Chris, who has no idea he’s fathered a son.

Ashley Gilmour, who plays Chris in the UK Tour of Miss Saigon, said: “It’s incredible to see a machine of such power and scale in the flesh. I fly on stage in a replica ‘Huey’ every night on UK Tour so coming face-to-face with the vehicle which inspired it is just incredible. As a cast, the research that goes into this production is something that we take really seriously. At the start of the rehearsal process, we watched countless documentaries and films from the height of the Vietnam conflict to really get to grips with the world we were representing on stage. So to see something like this in person gives you a real sense of what those soldiers were experiencing. And the noise! It’s just mind-blowing, like nothing I’ve heard before…”

Phil Connolly, Owner of the Huey 509 added “I’ve seen Miss Saigon several times before so when we got the call from Birmingham Hippodrome, we jumped at the chance to be involved. It’s a real honour to meet Sooha and Ashley and introduce them to this iconic piece of military history.”

“I first got into flying in the early 90s as a fixed-wing pilot. I eventually got so fed up of the English weather that I moved into helicopters. My first purchase was an ex-military gazelle helicopter which I flew for two or three years. As my enthusiasm grew, there was only one helicopter that I wanted to own and fly and that every other pilot I knew wanted to fly too and that’s the ‘Huey’. I think I was the first one in the UK to achieve it and still am. The ‘Huey’ is one of the most versatile models of military helicopter. It can carry up to ten troops and comes equipped with three stretchers that can be fitted onto its sides. In Vietnam, it doubled-up as a battlefield taxi, medi-vac vehicle and as an invaluable source for transporting and carrying equipment. It’s a truly amazing piece of engineering”.

Since its London premiere in 1989, Cameron Mackintosh’s production of Alain Boublil and Claude-Michel Schönberg’s legendary musical Miss Saigon has become one of the most successful musicals in history.

The original Broadway production of Miss Saigon opened on April 11, 1991 with what was the largest advance sale in Broadway history ($37 million).  The show went on to play for nearly ten years and 4,063 performances seen by more than 5.9 million people.

Miss Saigon has been performed in 28 countries, over 300 cities in 15 different languages, has won over 40 awards including 2 Olivier Awards, 3 Tony Awards, and 4 Drama Desk Awards and been seen by over 35 million people worldwide.

In March, this production of Miss Saigon opened on Broadway where it plays to nightly ovations and has just been nominated for the Tony Award for Best Revival of a Musical.

When the smash-hit run of this production opened in London in May 2014 to record-breaking advance sales and critical acclaim, Dominic Cavendish in The Daily Telegraph wrote, “This thrilling new production spills out beyond the theatre and speaks directly to the times we live in”. The show swept the board at the 2015 Whatsonstage.com awards winning a record breaking nine awards, the most awards ever won by a single show in the 15-year history of the awards including: Best West End Show and Best Revival of a Musical.

Miss Saigon runs until Sat 23 September at Birmingham Hippodrome. For tickets, call Information and Sales on 0844 338 5000 or visit www.birminghamhippodrome.com for details.