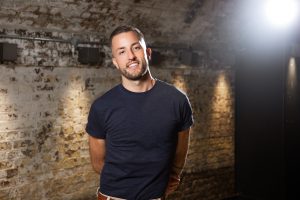 Next week we will be streaming MT Fest UK 2021, an exciting festival fresh from London’s Turbine Theatre dedicated to showcasing the very best in new musical theatre. The festival gives new audiences an insight into creating new shows and the art of collaboration whilst elevating new musicals to full production.

We spoke with Paul Taylor-Mills, Artistic Director of the Turbine Theatre and founder of MT Fest UK to find out more about his festival highlights and how panto at the Hippodrome shaped his career.

Hi Paul, tell us a little about MT Fest UK?

I established MT Fest UK three years ago when I was Artistic Director at The Other Palace, which at the time was the venue to try out new musicals. I guess in its briefest form, MT Fest UK is a showcasing opportunity for new musicals to really exercise them, try them out and bring audiences into the process of what it’s like to create a new musical.

Why is it so important to champion new musicals in this way?

I think it’s so important to champion new musicals; I feel as a young producer I have a responsibility to cultivate and nurture the audiences of tomorrow and make sure the work created is of interest to future audiences, whilst still telling stories that resonate with people now. Musical theatre can be so hard to get right as an art form so this is great way to get the audience involved in the process.

It certainly doesn’t mean we still don’t want to do revivals of classic, much loved musicals too, but this is a such a great way to get the audiences to be part of the development process. Films do lots of test screenings with audiences and even edit the films around that audience feedback, whilst sometimes in theatre we can spend years developing a new show, then by the time we hit previews it can be really hard to change anything as the set is made, the cast is in and it can be tricky to adapt the show according the initial audience response.

During MT Fest UK we gets lots of people take to social and email us to share what they think of the shows, but ultimately, you can definitely feel it in the room – there’s a magic that happens when an audience is watching and you can tell instantly if a moment is resonating or if there are gaps in the story. This is why it’s so crucial audiences can be involved; tt’s a chance to own the conversation and see what works in a new show.

Can you give us some of your festival highlights?

It’s like asking who your favourite child is! I like to think of the festival as a chocolate box, we try to keep the programme completely varied with the stories, the people we work with to give a really broad programme.

Personally though, I am excited about Cake. It’s Directed by Drew McOnie (also a fellow brummie!) and written by Morgan Lloyd Macolm who just won an Olivier Award for Emelia.  Cake is a modern rap and RnB retelling of Marie Antoinette and the affair of the diamond necklace.

I’m also super excited by Millennials by Elliot Clay and Directed by Luke Sheppard, who I did In The Heights with many years ago! During lockdown I contacted Elliot who hadn’t written a musical before to see his thoughts and this extra time we were given gave me a chance to really work with writers to develop new projects we wouldn’t have considered ordinarily. I am a firm believer in looking back at some of the brighter moments from last year and it is joyous to find some positives and go on a journey with more time for projects like this. There’s no doubt the last year has been incredibly hard but we have been able to come back with a renewed energy on the stories we want to tell and opportunities we can develop.

You grew up in the Midlands, can you tell us about the shows you saw at the Hippodrome growing up which inspired you?

I grew up in Kidderminster so the Hippodrome really was my place to go!

I remember coming to watch a pantomime with Joe Pasquale and Letitia Dean, and as a kid from a small town that wanted to go to the theatre I remember it being so brilliant to see a whole world onstage and feel part of it. I wasn’t sure what I wanted to do in theatre but I knew I wanted a job where I too could be part of and take people to a different world for a couple of hours, I thought it was magical. It reinforces how important panto is as a first experience of theatre.

That feeling of walking through the doors and knowing something exciting is about to happen, whether that’s my own shows in the West End or when I go to see something in my spare time, it’s unbeatable!

And lastly, can you sum up MT Fest UK in three words?