In this special commemorative blog, Hippodrome Heritage Volunteer and life-long fan Ivan Heard pays tribute to the undisputed King of variety entertainment, the one and only Sir Ken Dodd! 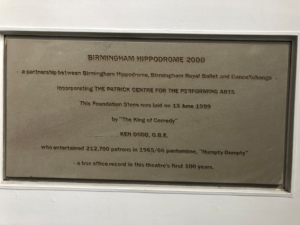 Ken was a comedy legend, loved by audiences for over 60 years and revered by his fellow comedians. He was the last of the British comedy greats from the Variety days and we will never see the like of him again.

Doddy was part of the DNA of the Birmingham Hippodrome – as a star performer, supporter, record-holder, honoured in two stalls seats and layer of the foundation stone for our 2000 redevelopment.

Born in Knotty Ash, Liverpool in 1927, he continued to live in the same house throughout his career and, fittingly, died there yesterday. He began performing locally with a ventriloquist’s doll (still part of his act nearly 70 years later) and made his first professional debut at the Nottingham Empire in September,1954. Within four years he was topping the bill in Blackpool.

Ken made his first Hippodrome appearance appropriately on All Fools Day, 1 April,1957, accurately described in the programme as ” the Unpredictable”- also marking her first Birmingham Hippodrome appearance on the same bill was singer Petula Clark. I first saw him in 1959 at Great Yarmouth’s Britannia Pier Theatre and, when I saw him last in 2017 at the Alexandra Theatre,  he was still cracking some of the same jokes!

Doddy’s second Hippodrome show ran for five weeks, twice nightly, in March/April, 1962. It was spectacular and included the famous Bluebell Girls from Paris and Eddie Calvert, “the man with the golden trumpet”. Not yet the famous Ken Dodd marathon performances.

He returned for our 1965/1966 sell-out pantomime “Humpty Dumpty”, setting up the unbeatable record of nearly 213,000 people attending between December and March. This show came after Doddy had just finished a record 42-week run at the London Palladium and when he was riding high in the charts with his hit record “Tears”. The pantomime also marked the first appearance of Doddy’s famous Diddymen, who were then local Betty Fox Babes.

By 1980, Ken was coming to the Hippodrome in shows he was presenting himself, hiring the theatre and a couple of support acts – the pattern he continued right up to last December, when he appeared in Wolverhampton, just before becoming ill. This gave him the freedom to do longer “turns”  and so began those marathon performances, lasting often from 7.30pm until well after midnight. Value for money for his fans but a nightmare for theatre managers.

Even after a long joke-telling session, there was nothing he liked more than to chat over a drink in his dressing room with theatre staff. “The Ken Dodd Show” became the ” Ken Dodd Laughter Show” and then “The Ken Dodd Happiness Show”- nicely summing up the laughter and happiness he spread to countless millions over the years.

In November, 1999, in the Hippodrome’s centenary year, Ken closed the first half of the Royal Variety Show here- even keeping, more-or-less, to his allotted time! He was a great favourite of the Royal Family and many politicians, including Harold Wilson and Margaret Thatcher. Any comedian who could bridge that political divide MUST be a genius!

Ken’s last Hippodrome appearance was in 2010. He loved our theatre and was a great supporter. Indeed he was a supporter of all British theatres and had the ambition to play every venue in the land – I think he must have achieved that. In later years, Ken filled the Alexandra Theatre, for the last time in 2017. I’m glad I saw him then, still doing that marathon but maybe at a slightly slower pace and looking older. But what a performer, standing on the Alex stage for well over four hours at the age of almost 90.

My Heritage Volunteer colleague and friend Sophie Lewis came too and she told me today that she remembers Ken’s genius and stamina- she was pleased to have experienced a show business legend. I took my son to one of Ken’s last Hippodrome shows and he remembers him with affection, even though towards the end of a five-hour stint, he was decidedly wilting- my son, not Doddy!

A final word from Peter Tod, former Director of the Hippodrome and long-time friend of Ken Dodd. He said that Ken was a STAR (he asked me to put that in capitals) in the true sense of the word and there was nothing more that he liked than to hear the sound of laughter. And there was certainly plenty of laughter over nearly 70 years.

Sir Ken Dodd, comic genius and show business legend, the Hippodrome salutes you and remembers you with great affection.

Sir Ken gave me so much Happiness all through my life, he was like a best mate to me. I was also at his last performance 2017 at the Alexander Theatre, front middle row, Sir Ken used myself and wife in much of the participation, with Dicky Mint looking straight at wife in response to Sir Ken asking him if he seen anyone he liked. We put Northfield on the map, when Sir Ken, I am sure, used his skills to wind me up, not understanding the name. At the end of the night, Sir Ken gave me his very own tickling stick, which takes display on our wall at home, he gave me the thumbs up and wave at end of show, leaving me with Tears of joy, knowing that I actually spoke to the Great man himself. So glad we were there, not knowing this would be the last time in Birmingham and for us to see him. Sir Ken Dodd you will be sadly missed, all that's left for me to say is Tatty Bye Sir Ken Tatty Bye RIP

Wonderful man making so many people laugh during his life. Not many people can leave such an amazing legacy. I remember watching expressions of my eldest son and ex husband never seen expressions like it before or since.

I saw Ken Doddonly once, at the Hippodrome-don't ask me exactly which year it was but I remember that it was a warm Summer's evening. My mother wanted to go more than me initially. I was in my early thirties and thought that his humour would be too "dated"for me to enjoy. Oh how wrong I was-he was really topical, current brilliantly observational and I can honestly say that it was one of the best live comic acts that I have seen (along with the likes of Frank Skinner, Lee Evans, Rik Mayall and Ade Edmondson) to name just a few. We didn't leave the theatre until after 1am-it was just fabulous. RIP Ken, you always kept it fresh.

Thank you Ivan for a wonderful tribute to a truly funny man who made us all laugh. I am sad that I never took the opportunity to see him on stage,thinking I might end up spending the night in the theatre ! It would have been worth it though.

When watching Doddy, you knew you were in the presence of greatness, even at 1 in the morning. Thanks for all the happiness Doddy. RIP