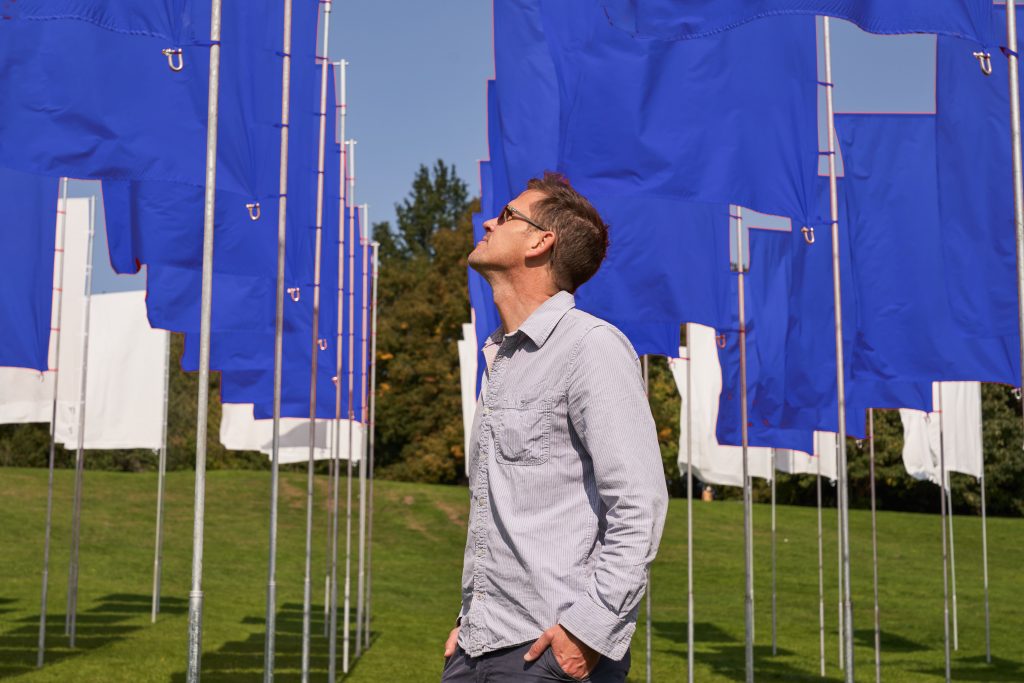 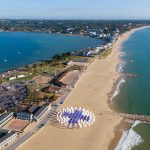 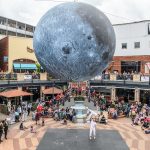 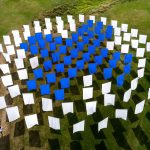 Artist Luke Jerram’s work In Memoriam, which comes to Birmingham in May, is his response to the thousands of deaths during the COVID-19 pandemic and a tribute to the many health workers caring for them.

Based in the UK but working internationally, Luke’s projects include sculpture, installations, and live artworks including Gaia, a floating globe offering an astronaut’s view of planet earth, and Park and Slide, a giant water slide placed in a high street in Bristol.

In Memoriam, which will be installed in Aston Park between 8-16 May, is a touring artwork comprising 120 flags made from bedsheets in the form of a blue medical cross in a circle of white. Presented in Birmingham by BrumYODO, a community interest company dedicated to encouraging conversations about death and dying, and Birmingham Hippodrome, In Memoriam offers people a public space for contemplation and commemoration.

“When the pandemic hit, I thought the artwork could function as a memorial for all the NHS workers and everyone we have lost in the pandemic,” says Luke. “Since last year we’ve had more than 120,000 people die from Covid. The statistics are shocking and it just felt like the artwork resonated.”

As an outdoor installation, it has been possible to present In Memoriam in various locations and times during the past year.

“As a consequence of lockdown, we’ve all come to appreciate our green spaces and open vistas in a way that we’ve never done before. So creating an artwork on those locations has been ideal. The artwork could still be presented safely in lockdown because we all have access to open spaces. We’ve all needed these open vistas as a way to contemplate what’s been going on.”

In Memoriam was first presented in Antwerp in Belgium last August but because of travel restrictions Luke was unable to visit. However a month later it received its first installation in the UK at the Greenwich + Docklands Festival. It has since toured to the Norfolk and Norwich Festival, Newbury, Bournemouth Arts by the Sea Festival and Worcester Arches Festival.

People have responded in a very personal way to In Memoriam.

“The artwork has different meanings depending on what people bring to it,” Luke says. “I think adults are quite moved by it. Also suddenly people who are key workers and NHS workers have found somewhere they can have space for contemplation.

“I try to make artwork that can be read and appreciated at different levels. So if there are four-year-old children running between the flags having a nice time chasing each other that’s also absolutely fine.”

In Birmingham, In Memoriam forms part of A Matter of Life and Death – an annual festival held each year by BrumYODO as part of national Dying Matters Awareness Week. The festival presents an ambitious and diverse arts and community programme each year, supporting people to have open and honest conversation about death and dying. This year’s festival is held in partnership with Birmingham Hippodrome and also features an online events programme and a city-wide community activity inviting people of all ages to create their own In Memoriam flags to be shared in an online gallery.

“Since the artwork was last presented in October the entire country has seen another 80,000 deaths as a consequence of the pandemic so I think In Memoriam will be read differently this year from last year. It seems to have been a very hard winter and some people will respond to that.”

In Birmingham, In Memoriam is sited in the grounds of Aston Park and can be visited in line with Government COVID-19 regulations. Luke is keen to see the work in its new environment.

“When the artwork was presented on Bournemouth Beach in 50 mph winds it was very beautiful but it was also noisy and quite haunting. When it was presented in Newbury at the bottom of a hill it was a much calmer experience.”

Luke’s Museum of the Moon, a fusion of lunar imagery, moonlight and sound, was a highlight of Birmingham Hippodrome’s Summer in Southside Festival in 2019.

“The Hippodrome is a very established organisation and I feel proud to be working with them and with BrumYODO,” he says. “It’s great that they want to share my artwork in Birmingham again. I haven’t had an exhibition in Birmingham for a while and I’m really looking forward to seeing In Memoriam on this site.”

BrumYODO and Birmingham Hippodrome present In Memoriam by Luke Jerram at Aston Park between 8-16 May. The installation is free to visit, is in line with Government lockdown restrictions and has COVID-19 safety measures in place. Find out more here.