With just under three weeks until the West End and Broadway smash-hit Billy Elliot glides into Birmingham, Heritage Volunteer Ivan Heard has been mining the archives to dig out some of the unlikely local heroes who have graced the Hippodrome stage across the years….

Throughout its 117-year history, Birmingham Hippodrome has provided a stage on which ordinary people can have their moment in the spotlight. Just as Billy Elliot emerges from his County Durham community to follow his dreams, so have many others had their time to shine on our stage.

Appropriately, with Billy’s background of the coal miners’ strike in 1984/1985, miners at one time appeared regularly at the Hippodrome. In January, 1902, the opening spot on the Variety bill was taken by “The Singing Staffordshire Collier” James Singleton – a genuine collier and a singing marvel who worked at the Windmill End Colliery, Dudley for seven years and who has always proved himself to be a steady, honest workman”.

Last on the same bill was “The Singing Durham Collier” – “the most marvelous vocalist ever discovered, a man with a naturally pure voice who, four weeks ago, was working at his vocation in Durham, since which he has appeared at the London theatres with phenomenal success”.

In August, 1908, the opening variety turn was Percy Farrimond- “the original Lancashire Singing Collier”. He was followed by others, including Godfrey James and J.H. Greener- “the Singing Pit Lad”. All of them were hoping to exchange the danger and dirt of working under the ground for a better life on the stage.

Straight from the streets in August 1905 had come Ford and Barris. The former was a “leg mania dancer” and his colleague was a “bone soloist and organist”. According to the programme for the show, “these boys but a few weeks ago were performing in the streets of London, when they were noticed by Thomas Barrasford (then the proprietor of Birmingham Hippodrome), who remarking on their extraordinary abilities, immediately booked them for all the principal London Halls and has now much pleasure in presenting them for the first time out of London in Birmingham”.

From the Hippodrome’s earliest days, local people have been a regular fixture of the Birmingham Hippodrome stage. In May, 1902, W.Selkirk presented his “new and up-to-date Juvenile Spectacle ‘The Handy Man in China’, performed by 100 children of Birmingham”. The “Owl” said that “the sketch, in which a number of well-drilled Birmingham children took part, got a hearty applause”. Mr. Selkirk returned with his 100 children in “All Scotch” in November, 1903 and again, with “Japan’s Handy Man”, in November, 1904.

The Betty Fox Babes first appeared in the “Aladdin” pantomime in 1959/1960 with singers Dickie Valentine and Eve Boswell and veteran comedian Norman Evans as Dame. Betty herself, who had dance studios on Bristol Road, Edgbaston, first appeared at the Hippodrome in a Sunday Concert on 10 March, 1929. Former Hippodrome Assistant Manager Audrey Styler took her first dance steps with Betty Fox and later toured in Variety with her Teenage Dance Troupe.

We must not forget those wonderful moments in front of the panto song-sheet when one of the star comedians invites local children on to the stage. These heart-warming and “laugh out loud” interludes keep the comedian on his toes and provide great memories for the children of their time when they were the stars of the show. 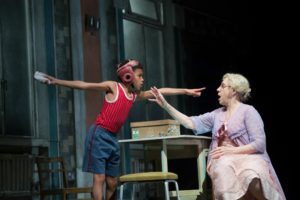 Way before “Britain’s Got Talent”, from the mid-1930s Canadian-born talent scout and impresario Carroll Levis encouraged hundreds of ordinary, talented people on to the stage. He first came to the Hippodrome in April, 1938 when Rosalind Cresswell from Stirchley was featured. In October the same year, Carroll brought with him some more undiscovered Birmingham talent-violinist Jimmy Davis; soprano Norah Bennett; and singer Wyndham Adams. I wonder what happened to them?

We know what happened to another local lass. In December, 1952, Carroll Levis introduced “Birmingham’s glamorous starlet Violet Pretty”. She had been born in 1931 in Handsworth and had won the “Miss Great Britain” title in 1950. She became Levis’ personal assistant on his talent-spotting shows and later went to Drama School. Changing her name to Anne Heywood, she was in 1950s films. She is now retired, aged 85, in Beverly Hills, California.

From 1968, the Scout Association of the County of Birmingham every year staged spectacular Gang Shows, produced by Peter Harris and Alan Coleman from ATV, the then local ITV company, and choreographed by Audrey Styler. She had the difficult task of drilling a large cast of boys who had never been on a stage before but, with good humour and a fair amount of iron discipline, Audrey knocked them into shape! These shows were sell-outs and were presented just before the pantomime until 1984, when increased costs brought the curtain down on them.

During these shows, one or two Hippodrome milestones were passed. The Gang Shows were the first to use the full depth of the extended stage in 1984; the first to use the hydraulic lift which raises the orchestra to stage level; and the first in the country to introduce Girl Guides into their shows.