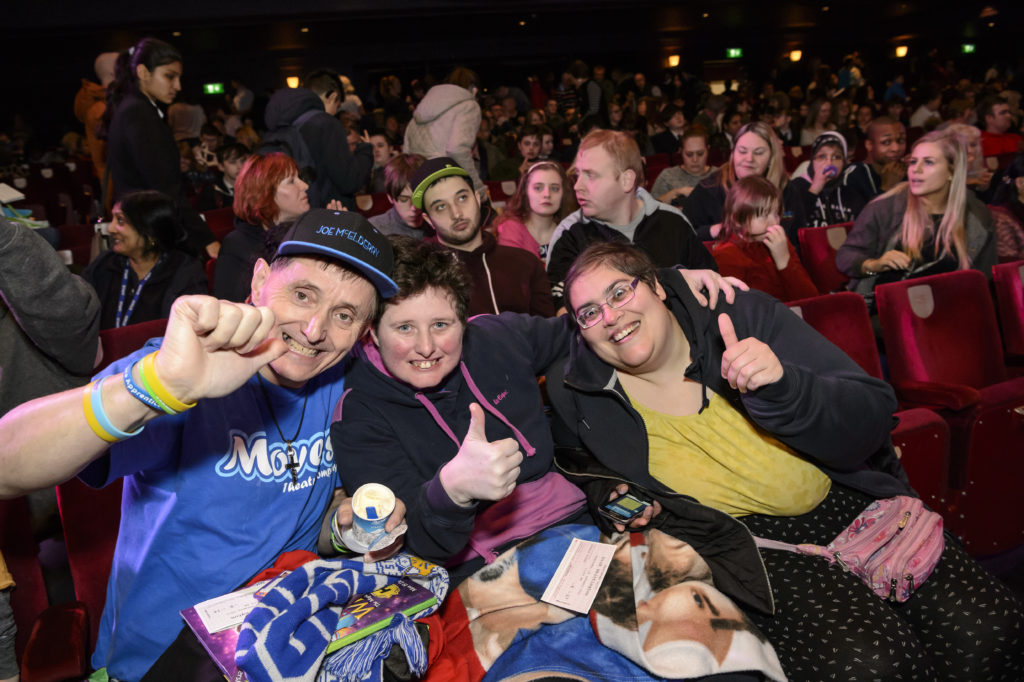 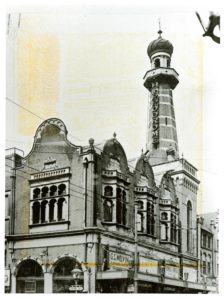 In countdown to our first ever Relaxed staging of The National Theatre’s hit production The Curious Incident of the Dog In The Night Time on 3 July, Hippodrome Heritage Volunteer Sophie Lewis takes us on a fascinating tour of how the theatre’s facilities have changed and evolved over the building’s 118 year history to meet the needs of staff, patrons and performers with specialist access needs.

The Birmingham Hippodrome building has been through many renovations and redevelopments over its 118-year history. There have been changes to the stage, updates to the dressing rooms, new coats of paint and several different facades from the original brick work with a tower to the 1960’s concrete frontage and from the 1980’s pink fibre glass front to the modern glass exterior you saw when you walked into the theatre today. But there hasn’t just been changes to the backstage areas and the frontage – the foyers and the auditorium have had their fair share of updates gradually making them more accessible both to patrons, staff and performers with access requirements.

In 1899, on 9th October the Hippodrome opened as ‘The Tower of Varieties and Circus’. The auditorium was set in ‘the round’ with a total of 3,000 seats in four tiers, encircling a central stage. The auditorium was accessed by ‘a spacious and well-lighted corridor’ which tunnelled underneath the adjoining City Assembly Rooms built by the Draysey brothers who also built the Circus. According to newspaper articles from the period, the auditorium ceiling was painted in green and terracotta with the walls coloured Pompeian red!

The Tower of Varieties closed after only five weeks and the Draysey brothers redesigned the theatre into the ‘end on’ configuration that you can see today. The theatre reopened on 20th August 1900 as the ‘Tivoli Theatre of Varieties’ and now accommodated a total of 2,600 patrons. The stalls consisted of 400 tip-up seats at the front, with 800 seats at the back in ‘The Pit’. A dress circle and lounge had enough seating for 600 and a third tier called the gallery held a further 800 people. The stage was raked, so that the audience in the flat stalls seating could easily see the performers. There were no microphones during this time, so anyone who was hard of hearing would have had to pay for the more expensive seats closer to the stage if they could afford to. The public who had difficulty walking or users of wheelchairs would have been unable to attend the performances unless they could be carried down the stairs and into the auditorium. 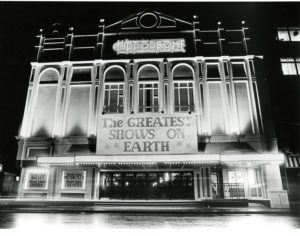 In 1925, after the Hippodrome was purchased by Moss Empires (later Stoll-Moss Theatres), the theatre had a face lift. The third tier of seats was removed making the auditorium more comfortable and spacious for the now 2,000 audience members. The colour of the auditorium was changed to pale blue and cream with golden accents and according to reports, there was even a skylight located above the orchestra. These changes, which improved the atmosphere and comfort for the existing patrons, didn’t make the theatre any more accessible for those with physical impairments. 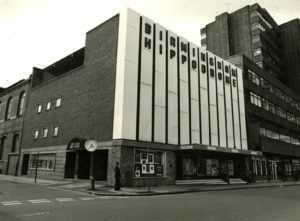 Other than the removal of the unstable ‘Blackpool-like’ tower and the changing of the frontage to concrete blocks in 1963, the Moss group did not undertake any further redevelopments of the interior of the Hippodrome. In 1979, Moss Empires sold the Hippodrome to Birmingham City Council who then leased the building to the Birmingham Hippodrome Theatre Trust, a non-profit making charity who have run the theatre ever since. The trust raised funds to enable the much-needed modernisation of the building, which was completed in 1981. The modernisation included the levelling of the raked stage (so dancers could perform on it), the extension of the proscenium arch, new sound and lighting systems, new dressing rooms and a new fly tower (for scenery) and stage lift. The changes were to enable larger productions to be staged at the theatre but they still hadn’t overcome the issue of accessibility for all to the theatre.

In 1999, after celebrating both the theatre’s 100th anniversary and the staging of the Royal Variety Performance, the theatre was closed to allow for major redevelopment. The auditorium was painted and designated areas for wheelchair users were incorporated in both the stalls and circle seating levels. The foyers were completely opened creating space for the audience to relax prior to entering the auditorium. Lifts were installed in the foyers giving audience members with mobility issues access to all levels of the theatre. A 206-seat theatre (Patrick Centre) was built and the main stage and loading dock were extended. More dressing rooms were built and existing ones were modernised. A home for the Birmingham Royal Ballet and DanceXchange was created along with a centre for the prevention and rehabilitation of dance injuries. The theatre was now accessible and able to accommodate patrons with access requirements.

Since the reopening, 16 years ago, the Hippodrome has improved its access further. It now offers a programme of signed, audio described and captioned performances. Touch tours have been introduced, so blind and visually impaired can familiarise themselves with the props and scenery before attending a performance and assistance dogs can be accommodated with care being provided for the dog during each act.

People with autism, learning disabilities or sensory and communication disorders are now also able to attend relaxed performances at the Hippodrome with one being included during this run of The Curious Incident of the Dog in the Night-Time. The specially adapted performances make it a more relaxed atmosphere with quiet rooms and fidget toys, which enable those who might feel excluded from other performances to enjoy a night of entertainment at the theatre. The Hippodrome had a slow start in ensuring that the needs of people with disabilities were met but since the 2000 redevelopment, it has made major improvements and long may they continue to enable the doors are kept open to all who want to visit.

Hello, I have an old photograph of Eric Morecambe taken in Birmingham, when Eric & Ernie brought one of their shows to the Hippodrome. He was suffering from a sore toast at the time and photo shows Eric with a scarf around his mouth. I think it dates from 1980-1981 but I may be wrong. Does the theatre keep records of when Morecambe & Wise last performed at the Hippodrome. Many thanks John Hess