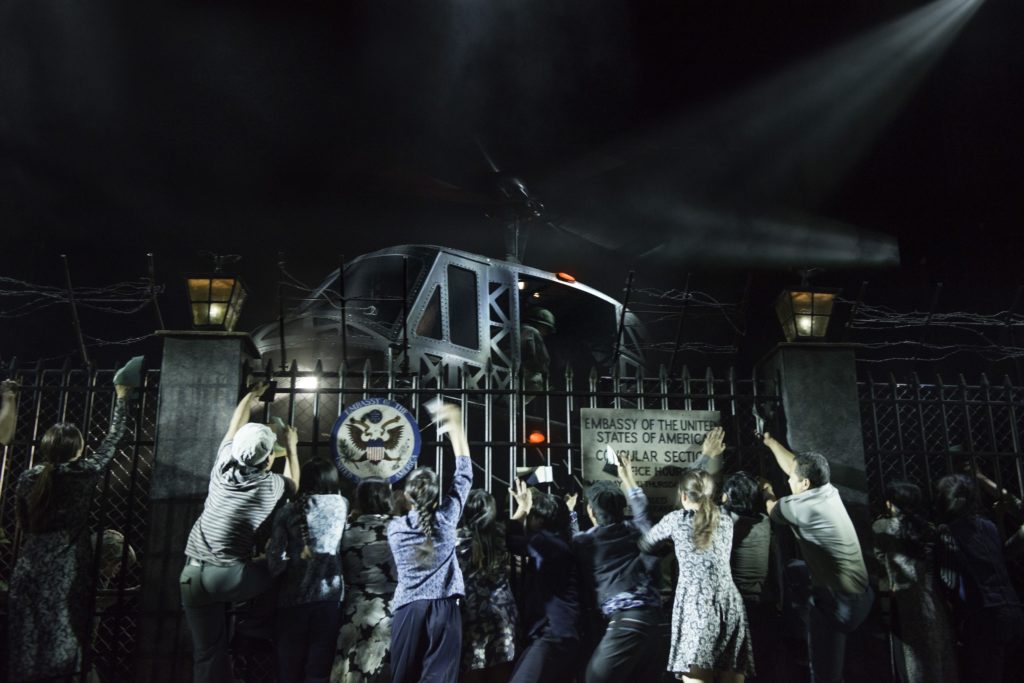 From the soaring melodies and epic majesty of Miss Saigon to the magical sets and spectacular special effects of Mary Poppins – nothing sets our temperatures soaring here at the Hippodrome quite like a ‘mega-musical’!

In countdown to the return of the original Broadway blockbuster, Miss Saigon, Hippodrome Heritage Volunteer, Ivan Heard, takes us on a magical ‘musical’ tour through the archives, re-tracing the genre’s evolution…

Sir Cameron Mackintosh, now marking 50 years as a producer, helped to revolutionise the British musical theatre and, together with Andrew Lloyd Webber, gave us the “mega-musical”.

The first English “musical” is generally regarded as being John Gay’s “The Beggar’s Opera”, a sensational London hit in 1728. It established the genre of the “ballad opera” which spread from Britain to America during the 19th century. European influences were also at play, particularly in operettas from the Strauss family in Vienna and Offenbach in Paris.

Between 1871 and 1896, the quintessentially English operettas of Gilbert and Sullivan were the rage of the West End but by 1896, the successful partnership had split up. However, their popularity endured and they were still being staged at the Hippodrome into the 1990s.

As the 20th century dawned, the musical had begun to blossom. In 1898, the American musical “The Belle of New York” had been a huge hit and this show could be regarded as the Hippodrome’s first tentative step into this genre. In 1911, a Variety bill included five scenes from the show; in 1978, the Birmingham and Midland Operatic Society performed it here.

Edwardian musical theatre was becoming more and more popular with shows like Franz Lehar’s “The Merry Widow” and “The Count of Luxembourg”; Lionel Monkton’s “The Quaker Girl” and “The Arcadians” were especially successful English musicals. Their enduring appeal is evident because they were revived on our stage in the 1960s by BMOS and the Forward Operatic Company.

These musicals transported audiences to romantic, idyllic places and were lavish with large casts. Such escapism was badly needed in WW1 and, in 1916, one of the biggest hits opened. “Chu Chin Chow” set records only beaten in the 1950s and soldiers on leave from the trenches flocked to His Majesty’s Theatre in the West End to revel in its spectacle. Here at the Hippodrome, it was staged by BMOS in 1958 and also on ice for the Christmas season in

The romance continued post-war with Noel Coward’s Bitter Sweet (1929) but the undoubted star of the 1930s and 1940s was Cardiff-born Ivor Novello, matinee idol, actor and composer. He had a string of hit shows at the Theatre Royal, Drury Lane, beginning with “Glamorous Night” in 1935. Novello’s musicals were indeed glamorous and romantic and full of beautiful melodies. Their popularity reached out to Hippodrome audiences right up to the 1980s, when Simon Ward starred here in ” Perchance To Dream”. Ivor’s last show, “Gay’s the Word” in 1951, brought its star Cicely Courtneidge to our stage and drew full houses.

Ivor Novello himself starred in his “The Dancing Years”, at the Hippodrome in January, 1945 and it was skated on ice at Christmas, 1954. However, by then the next big musical influence had been coming over from America, courtesy of Rodgers and Hammerstein. Gone were the frivolous song and dance shows; here were stronger musicals that dealt with real issues and substantial characters. The songs and dances (even some of them incorporating ballet sequences) were fully integrated with the plot and characters. The first of this new genre was “Oklahoma!”, whose first national tour went to the Theatre Royal in New Street. The Hippodrome,still then mainly a Variet theatrey, did not stage it until November, 1961.

Next up was “South Pacific”, again going first to the Theatre Royal in 1953 with a cast that included in the chorus an unknown Sean Connery.. BMOS revived it here in 1960 and, for their 75th Birthday, they staged for the first time at the Hippodrome “The King and I”.

But the Americans did not have it all their own way. During the 1950s, there were two British musicals that set new records. “The Boy Friend” by Sandy Wilson opened in 1953 and became a hit both in the West End and on Broadway. The following year Julian Slade and Dorothy Reynolds’ small-scale and intimate “Salad Days” opened at the Vaudeville Theatre in the Strand for a run that exceeded 2,000 performances. It first came to the Hippodrome in June, 1960.

When he was eight years old, Cameron Mackintosh was taken to see “Salad Days” and it was this show that sowed the show business seed in him.

In 1960, a pioneering British musical opened to poor advance sales at London’s New Theatre; very soon, however, a massive hit was created. Lionel Bart’s “Oliver!” transformed stage presentation with its landmark Sean Kenny sets and new technology enabled scenes to be changed in full view of the audience. It was brimming with great songs and dances and placed the British musical on a higher level. Cameron Mackintosh joined the show’s first national tour as Assistant Stage Manager and also performed as one of the singing and dancing Cockneys.

We must jump some excellent shows in the 1960s to the next great development in musicals. Andrew Lloyd Webber, with lyricist Tim Rice, had begun their partnership with a small-scale production of “Joseph and the Amazing Technicolor Dreamcoat” but in 1970 the rock musical ” Jesus Christ Superstar” exploded on to the stage of the Palace Theatre in the West End and the genre of the ” mega-musical” was being created. Its staging at the Hippodrome in 1981 opened a newly refurbished theatre with all the facilities to stage the forthcoming mammoth shows.

“Evita” followed in 1976 and Lloyd Webber’s collaboration with Cameron Mackintosh pushed the boundaries further with the spectacle and technical wizardry of “Cats” (1981) and “The Phantom of the Opera” in 1986.

At the Hippodrome, a spectacular London Palladium production of “Joseph” with Philip Schofield in 1994 set up a record-breaking run, followed by another sell-out with “Phantom” in 1998. “Joseph” had created a Hippodrome record when it became the first show to take more than £1 million on the first day of advance booking.

Another Cameron Mackintosh collaboration, this time with Alain Boublil and Claude- Michel Schonberg, produced the phenomenon that is “Les Miserables”, voted “the world’s favourite musical”. It had a four month season at the Hippodrome in 1997. The same partnership in 1989 created “Miss Saigon”, staged here first in 2003 and now returning for a third time.

These massive British musicals went global and became international hits. The so-called “Big Four” conquered the world, in no small part due to the brilliant entrepreneurial skills of Cameron Mackintosh. His attention to detail at every stage of production included branding, merchandising and ticketing and ensured that, wherever the shows were staged, they maintained the same high standards and quality.

Inevitably, there was a reaction to these mega-musicals and popular taste now also takes in the so-called “juke box musicals” like” Mama Mia!” and “We Will Rock You” with their thin plots and succession of hit songs. The genre of “family musical” has become successful with shows like “Mary Poppins”, The Lion King”, ” Chitty Chitty Bang Bang” and “Beauty and the Beast”.

I have had to miss out so many wonderful landmark musicals – “West Side Story” and “My Fair Lady”, for example – but they have all been staged at the Hippodrome over its eventful 118 years. The stalwart work of BMOS and the Forward Operatic Company was important in reviving the memory of many of those old musicals like “The Student Prince”, “Rose Marie” and “The Desert Song”. They maybe would not be so popular with modern audiences but at least they were not forgotten.

We have come a long way since our first full-scale musical, “Me and My Girl” in 1939, but the ingredients of a good musical remain the same- a good story, great songs and dances and quality productions. Long may that continue!