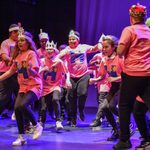 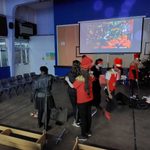 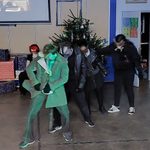 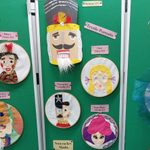 It’s been another busy term for our Learning & Participation Team; from brilliant school performances to dazzling dance showcases in our Patrick Studio, there has been many magical moments for young people to enjoy.

We caught up with three of our Learning & Participation Artists: Alice, Cheryl and Charlotte, to discuss some of the creative projects they designed and delivered over the last three months.

During the Autumn term, some of our HEN network Primary and Secondary schools took part in a project based on the musical Strictly Ballroom, which was on our stage in November. For the schools signed up to the project, they received a dance workshop, tickets to the show and an opportunity to perform in our Patrick Studio.

The project commenced with an introductory workshop, delivered in schools, by a practitioner with experience in a specialist dance genre. These included teachers in Contemporary, Ballroom and Latin, Musical Theatre and Street dance, with each school receiving a different style. Our Learning and Participation Artists, who work in schools weekly, then built on the skills developed in this introductory session to create a performance to share in the Patrick Studio. Due to the varying dance styles, the performances created ranged dramatically – but in the best way, including dances encouraging positive touch and partner work, to dances inspired by Stranger Things and Elvis Presley!

For the Primary Schools, the performances they created were shared with other Primary schools taking part in the project. There was a lovely atmosphere from the positive response students had to other pupils’ work as they cheered and clapped the other schools’ performances.

For the Secondary schools, we created a Strictly-inspired night of glitz and glamour with a more formal showcase event. The schools shared their performances with a paying audience of friends and family and we even had our very own panel of judges made up of freelance dance and musical theatre artists, two of which had been into schools to run the introductory workshops. The judges watched and gave positive and constructive feedback to all the students in real-time, increasing their confidence and prolonging that ‘performance buzz’!

Not only did our secondary schools perform on this evening, but our very own Musicals Youth Theatre, who train at the Hippodrome on a Saturday, also created a performance inspired by the musical Moulin Rouge to share. They worked extremely hard on a four-minute dance that explored multiple dance styles to a medley of well-known songs.

Both the Primary and Secondary showcases received positive feedback from parents, students and staff members alike. We created the project with an aim to truly celebrate dance, regardless of style or experience. In doing this project, we hope students not only celebrated this art form, but also grew in their own confidence to perform and developed skills in areas they never thought they would.

Cheryl  – One Snowy Night, Over and Under the Snow project

I am grateful to have created Regents Park School’s Christmas with year two children and teachers. The play was reimagined around the theme of snow, with two stories entwined: One Snowy Night by Nick Butterworth, and Over and Under the Snow by Kate Messner.

In the opening scene, Percy the park keeper closed his eyes while walking in the park, he listened to the sound of Christmas pine trees around him. ‘O Christmas Tree’ was gently sung by the children, followed with a piece of poem inspired by ‘The Christmas Pine’ by Julia Donaldson. The poem told a bittersweet story of every pine tree travelling far away from home to become a Christmas tree.

The children’s favourite part was: ‘I cannot stay forever here. Another tree will come next year. But think of me when I am gone; Remember how I grew and shone.’

Animals from One Snowy Night visited Percy one by one with a backstory inspired by the story Over and Under the Snow. Children in the park unveil the secret of a hidden kingdom under the snow where the smallest forest animals stay safe. The picture of children exploring Over The Snow and animals living and hiding under the snow portrays a somewhat poignant yet cozy scene of Winter to me. The children enjoyed singing and dancing to Little Snowflakes and Frosty the Snowman, which painted the feelings of snow in two ways: sometimes it feels soft and tranquil, sometimes it feels magical and joyous.

At the end of the One Snowy Night story, the animals sang along to Let It Snow, echoing to their emotions of not wishing to say goodbye to Percy and his warm-hearted welcome. In the closing scene, a child read the story of the Bethlehem star, as the other children wondered the origin of Christmas and the reason to why we celebrate it.

Inspired by Brian Wildsmith’s A Christmas Story, we followed the journey of a baby donkey with the hope to reunite with his mother, and how he met baby Jesus. The song of O Little Town of Bethlehem is the heart of this part of the play. The children performed Have A Holly Jolly Christmas at the end of the play, with the thoughts of sharing love and greetings to one another.

This Christmas, Selly Oak Trust School (SOTS), a member of our Hippodrome Education Network, was inspired to create its own version of the story of The Nutcracker.

The performance was performed promenade style around the school with the story of The Nutcracker being told in different rooms across the building through music, acting, dance, drama, film, art, and food. It involved students from Year 7-14 who were in the choir, performing in scenes, creating scenery and costume, guiding parents around the school, working on market stalls and in the bistro area. This demonstrated to the school community how many roles there are in putting on a production, and that pupils don’t need to be on the stage to take part. The performance was seen by an audience of 230 people across eight shows and was also presented to the whole school via a film edited by a SOTS teacher.

“I have never performed in front of an audience until The Nutcracker. I was a little nervous at the start and then started to get confident and it was amazing at the end. I was sad that it was all over.”

“My highlight was seeing how much people have grown in confidence, it made me feel proud. “

“I was delighted with how my students responded to the brief and their commitment and resilience during eight performances in a single evening was astonishing.”

As the doors close on another term, our Learning & Participation Team wish everyone a wonderful festive holiday and Happy New Year, and look forward to creating more fantastic projects in 2023.