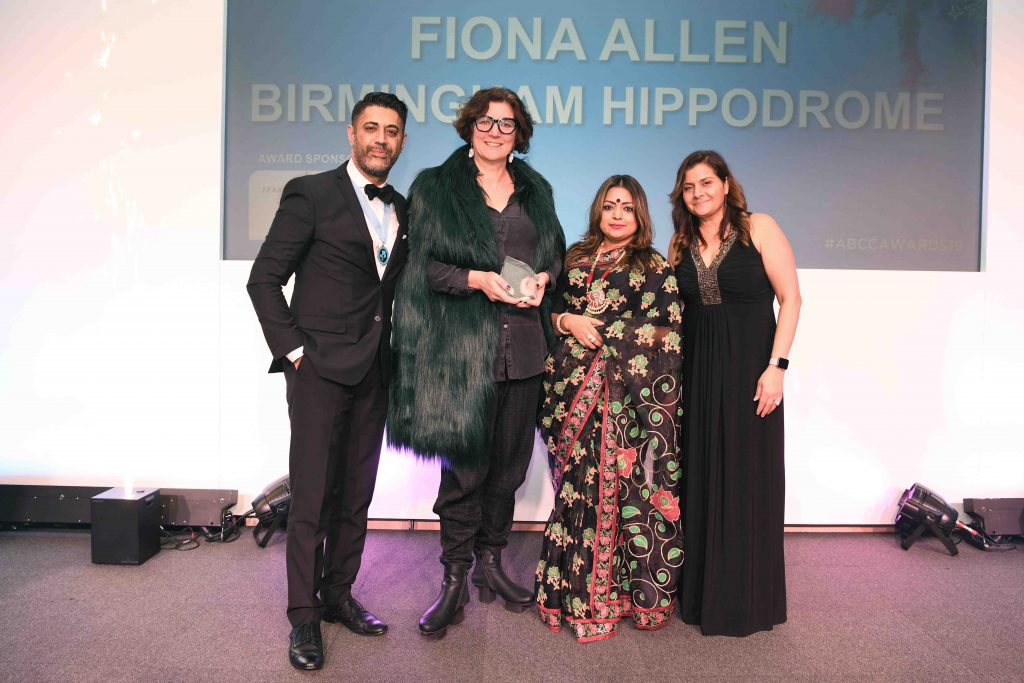 We are proud to announce Birmingham Hippodrome’s Artistic Director and Chief Executive Fiona Allan was awarded Outstanding Business Woman of the Year at the Asian Business Chamber Awards on Saturday 7 December.

The awards are a flagship event of the year to celebrate the remarkable achievements of businesses across Greater Birmingham. The judges recognised Fiona’s success in transforming the vision of the Hippodrome since becoming Artistic Director and Chief Executive in 2015 and her future plans to grow on this success as the world turns to the Midlands for key events such as Coventry City of Culture and Birmingham 2022.

Fiona commented: “I’m a proud advocate for our region and it was an honour to have been nominated alongside such brilliant business women. As Birmingham Hippodrome’s 120th anniversary year draws to a close, I’m thrilled to have been recognised for all the work we are doing to be a truly welcoming venue at the heart of the city.”

Mandy Canny, Director of Membership and chair of the judging panel added: “The judges felt that Fiona has shown clear business vision and strategy which puts Birmingham Hippodrome at the centre of the arts and culture sector for Birmingham and beyond. As one of the most successful and popular theatres in the world, Fiona has driven partnership and calibration to expand the reach and deepen engagement which makes a really difference in people’s lives.”

Fiona’s leadership has seen a 50% increase in the number of people reached each year by Birmingham Hippodrome, which last year saw nearly 850,000 engagements with culture. These included extensive work with schools, free festivals throughout the city, youth companies and holiday activities, and of course theatre attendances. The 120th anniversary season saw the Hippodrome’s first main stage musical co-production, The Color Purple, which has since been nominated for two national awards. Also, the first youth community production, West Side Story, which saw more than 1000 young people from the region auditioned to form an incredibly talented cast of 40, who performed to pack-out audiences in August.

Looking ahead to the future, her plans include to further grow the already successful festivals programme, increase artistic investment in the city and to create a ‘living room for Birmingham’ by transforming the Hippodrome building over the next few years.