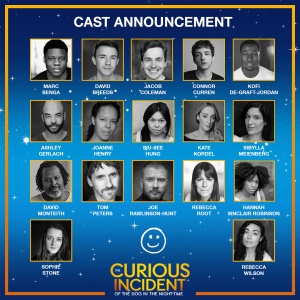 Casting has been announced for the return of The Curious Incident of the Dog in the Night-Time ahead of the award winning production arriving at the Hippodrome in 2022.

Back by popular demand, the Olivier and Tony Award®-winning production of The Curious Incident of the Dog in the Night-Time, adapted by Simon Stephens from the novel by Mark Haddon, and directed by Marianne Elliott (War Horse, Angels in America, Company) will open at Troubadour Wembley Park Theatre ahead of a week long run at Birmingham Hippodrome from Tuesday 29 March 2022.

The UK and Ireland tour also marks ten years of the production which originated at the National Theatre in 2012.

David Breeds most recently appeared in the West End premiere of Dear Evan Hansen. Connor Curren makes his professional stage debut in Curious Incident and is soon to appear in the NBCUniversal series Dodger. Kate Kordel’s recent television appearances include Coronation Street. Rebecca Root is known to audiences for the BBC Two sitcom Boy Meets Girl, The Queen’s Gambit and Doctor Who. Sophie Stone returns to the NT following her appearance in Mother Courage and Her Children. Her recent stage appearances include Emilia (Globe and West End) and television appearances include This Way Up and Jimmy McGovern’s Moving On. Tom Peters’ recent stage appearances include Girl from the North Country (West End) and Harry Potter and the Cursed Child. The casting process for Curious Incident has been supported by Access All Areas who will continue to work with the company across the tour.

Since 2012, Curious Incident has been seen by more than five million people worldwide. The winner of seven Olivier Awards, following its New York premiere in September 2014, it became the longest-running play on Broadway in over a decade, winning five Tony Awards®.

Mark Haddon’s novel The Curious Incident of the Dog in the Night-Time was published in 2003 and is the winner of more than 17 literary awards, including the prestigious Whitbread Book of the Year Award. The novel has been translated into 44 languages and has sold more than 5.5 million copies world-wide.

You can book your tickets for The Curious Incident of the Dog in the Night-Time here.