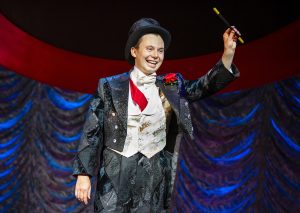 Birmingham Hippodrome have today (Wed 11 May) launched a competition to find the region’s top magician.

Inspired by the upcoming production of Magic Goes Wrong which comes to the Hippodrome from Tue 24 May – Sun 29 May, budding magicians are being asked to share a video clip of them performing their best trick. Entries can be submitted to Birmingham Hippodrome’s Twitter and Instagram channels using the hashtag #MagicGoesRight.

The successful sorcerer will win tickets to the opening night of Magic Goes Wrong on Tuesday 24 May as well as enjoying some VIP sparkle in the Hippodrome’s Proscenium Lounge during the evening.

A hapless gang of magicians are staging an evening of grand illusion to raise cash for charity. But as the magic turns to mayhem, accidents spiral out of control and so does their fundraising target!

To enter the Magic Goes Right competition entrants need to submit a video clip no longer than 2 minutes of them performing their best magic trick. The entry can be submitted on Twitter or Instagram, using the hashtag #MagicGoesRight and by tagging Birmingham Hippodrome in the post using the handle @brumhippodrome on both channels, or by emailing competitions@birminghamhippodrome.com

T&C’s – Tickets are valid for Magic Goes Wrong on Tuesday 24 May only, tickets are non exchangeable and non refundable. Winner must reply to correspondance by 5pm on Monday 23 May to redeem their prize.

Tickets for Magic Goes Wrong can be booked here.