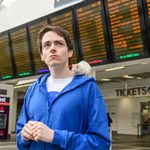 Visitors to Birmingham New Street may have spotted a rather curious sight yesterday afternoon when Christopher Boone and his pet rat Toby paid a visit to the station. The duo were seen exploring the concourse and checking out the timetable.

Actor Connor Curren is a graduate of The Royal Birmingham Conservatoire and has returned to the city to perform as Christopher in The National Theatre’s Olivier and Tony Award-winning production of The Curious Incident of the Dog in the Night-Time at Birmingham Hippodrome.

Fifteen-year-old Christopher has an extraordinary brain. He is exceptional at maths, while everyday life presents some barriers. He has never ventured alone beyond the end of his road, he detests being touched and he distrusts strangers. When he falls under suspicion for killing his neighbour’s dog, it takes him on a journey that upturns his world.

The production opened on Tuesday to rave reviews with critics calling it ‘the best thing on stage in the UK at the moment ’(Black Country Radio) and Connor’s portrayal of Christopher ‘nothing short of spectacular’ (What’s On Live).

Check out some more reviews below.

“The set and computer wizardry alone deserves a standing ovation”

“The Curious Incident Of The Dog In The Night-Time is possibly the most awe inspiring, mesmerising pieces of theatre I have ever seen.”

“I can honestly say it is certainly one not to miss and I don’t think 5 stars is enough!”

“This show is emotional and thought-provoking. The heavy subject matter is balanced carefully with moments of joy and humour. Fans of Mark Haddon’s wonderful book will not be disappointed.”

“A 5 star exceptional performance that I will remember for a very long time.”

“Bringing together a wonderful story from the best-selling novelist Mark Haddon, the captivating character of 15-year-old Christopher, impressive set and graphics and some highly imaginative physical theatre, the show is a winner on so many fronts.”

The Curious Incident of the Dog in the Night-Time 10th Anniversary tour is at Birmingham Hippodrome until Saturday 2 April.

Tickets are on sale now and can be purchased at birminghamhippodrome.com or by calling on 0844 338 5000*

*(4.5p per minute plus your phone company’s access charge).