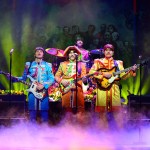 Beatlemania returns to Birmingham Hippodrome next month, when West End and Broadway smash-hit Let It Be rocks onto the stage, 53 years after the original Fab Four performed on the Hippodrome stage.

Celebrating the music of the world’s most successful rock ‘n’ roll band in a spectacular concert, Let It Be charts the band’s meteoric rise from humble beginnings in Liverpool’s Cavern Club, through to the height of Beatlemania, and their later studio masterpieces.

Seen by over one million people worldwide, Let It Be is packed with over 40 of The Beatles’ greatest hits including Twist and Shout, She Loves You and Drive My Car, as well as global mega hits Yesterday, Hey Jude, Come Together and, of course, Let It Be.

The cast of Let It Be features a number of talented musicians from the West Midlands, including Wolverhampton born Paul Canning who shares the role of John Lennon with Birmingham’s Reuven Gershon. Luke Roberts who plays Ringo Starr was born in Birmingham and has lived in Leamington Spa. Emanuele Angeletti and Iain Hornal share the role of Paul McCartney, with Paul Mannion and John Brosnan playing George Harrison. They will be joined on stage by Michael Bramwell on keyboards.