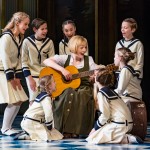 BBC1’s The Voice star Lucy O’Byrne and Coronation Street’s Andrew Lancel to play Maria and Captain Von Trapp in ‘The Sound of Music’ at Birmingham Hippodrome this May.

Bill Kenwright’s spectacular production of one of the greatest family musicals of all time, The Sound of Music, comes to Birmingham Hippodrome from Tue 24 – Sat 28 May 2016.

BBC1’s The Voice runner-up and award-nominated Lucy O’Byrne plays Maria.  Lucy became a household name when she shot to success as the runner-up in the TV talent show. With chart-topper Will.i.am as her mentor, and biggest fan, Lucy made history as the first classical singer to reach the final, impressing the nation with her stunning vocal range. Now, having recently performed at the BBC Proms, she makes her musical debut as the young postulant, Maria.

Andrew Lancel is best known as super-villain Frank Foster in Coronation Street, a role that earned him a ‘Villain of the Year’ award at the British Soap Awards. He also played DI Neil Manson in the long-running ITV television series The Bill. His numerous stage credits include Bill Kenwright’s touring productions of The Small Hand and Twelve Angry Men. Andrew starred in Epstein: The Man Who Made The Beatles in Liverpool and London, and most recently appeared on stage in The Damned United at the West Yorkshire Playhouse.

Produced by Bill Kenwright, directed by Martin Connor, choreographed by Olivier Award winner Bill Deamer, musical direction by David Steadman, this wonderfully lavish staging of the classic musical coincides with the 50th anniversary of the film version – the most successful movie musical in history.

It all began with the story of the Trapp Family Singers and Baroness Maria von Trapp’s 1949 autobiography, which inspired Richard Rodgers, Oscar Hammerstein II, Howard Lindsay and Russel Crouse to create a Broadway musical in 1959. The Sound of Music tells the true story of the world-famous singing family, from their romantic beginnings and search for happiness, to their thrilling escape to freedom as their beloved Austria becomes part of the Third Reich at the start of WWII.

The unforgettable score features some of the most memorable songs ever performed on stage, including Edelweiss, My Favorite Things, Do-Re-Mi, Climb Ev’ry Mountain, So Long, Farewell and of course, the title song, The Sound of Music.

Birmingham Hippodrome is an independent, not-for-profit, registered charity welcoming an average 500,000 visits annually making it the most popular single auditorium in the UK. Birmingham Royal Ballet and DanceXchange are resident partners; the theatre presents all of Welsh National Opera’s repertoire, co-produces the award-winning International Dance Festival and welcomes the best in international dance, major touring dramas, and West End musicals. It is home to the world’s biggest Pantomime and also houses the 200-seat Patrick Centre for the Performing Arts, with extensive events facilities and its own restaurant.

Hippodrome CREATIVE delivers successful projects in education and the wider community.  With numerous supportive partners it has recently co-produced and produced new events including Minimum Monument, The Voyage, Summer in Southside, About Town, Blitz, the 4 Squares Weekender (celebrating the opening of the Library of Birmingham) and Birmingham Weekender. It will shortly launch an extensive Heritage project and is presenting Furious Folly this summer co-commissioned by 14-18 NOW for the World War One commemorations.