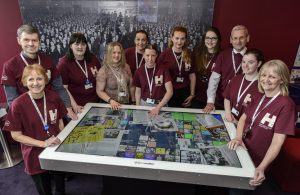 On Wed 25 May, Hippodrome CREATIVE unveils two new digital touch tables and a new archive website at Birmingham Hippodrome with the help of their dedicated heritage volunteers and pupils from Starbank Primary School, Birmingham.

The Hippodrome Heritage project, with an army of dedicated volunteers, has seen the research, collation and archiving of hundreds of items over the last twelve months all with the aim of bringing to life the history of Birmingham Hippodrome which opened as the Tower of Varieties and Circus nearly 117 years ago.

From show programmes and photographs to archive media footage, the foyer touch tables feature over 100 archive items taking audiences on a journey from the first performances in 1899 through to the 1999 Royal Variety Performance and the major touring musicals, ballet and opera performing on our stage today.

The archive website BirminghamHippodromeHeritage.com will include over 1,000 items, from programmes, to photographs, tickets, building plans and oral histories from staff, performers and audiences. There is also a database of every show which has graced the stage since 1899 including all the acts and performers.

Fiona Allan, Birmingham Hippodrome’s Artistic Director and Chief Executive said:
“After months of hard work cataloguing all we can find, including many donations of otherwise lost materials from our patrons, it is fantastic to see our Hippodrome Heritage project come to life.
Audiences can now share in our unique history with digital touch tables in the foyer and on a dedicated website. I would like to thank everyone who so kindly donated or volunteered to help bring our shared heritage to life.”

Fiona Cantrell, Hippodrome Heritage Volunteer said:
‘‘I have enjoyed looking through the programmes. The art work on the older ones, the adverts for things and places I remember and ‘wowing’ at all the stars that have come to the Hippodrome. Together with meeting some lovely people that has been my highlight!’’

At the launch event, the pupils from Starbank Primary School who participated in a heritage education day at Birmingham Hippodrome and workshops in their school, led by Highly Sprung Performance Company, will talk about their involvement working with Highly Sprung to uncover the stories of three characters who collectively bring the theatre’s history to life. The characters include a fictional Theatre Manager, Frank, from the 1980s, Rita the usherette from the 1940s (based on an autograph book which is included in the archive), and Dorothy Ward a performer in the 1900s who was born and grew up in Aston, Birmingham. She first performed as a variety act at the Hippodrome in 1912.

Birmingham Hippodrome is an independent, not-for-profit, registered charity welcoming an average 500,000 visits annually making it the most popular single auditorium in the UK. Birmingham Royal Ballet and DanceXchange are resident partners; the theatre presents all of Welsh National Opera’s repertoire, co-produces the award-winning International Dance Festival and welcomes the best in international dance, major touring dramas, and West End musicals. It is home to the world’s biggest Pantomime and also houses the 200-seat Patrick Centre for the Performing Arts, with extensive events facilities, and its own restaurant.

Through Hippodrome CREATIVE we deliver successful projects in education and the wider community. With numerous supportive partners we have recently co-produced and produced new events including Minimum Monument, The Voyage, Summer in Southside, About Town, Blitz, the 4 Squares Weekender and Birmingham Weekender (celebrating the opening of New Street and Grand Central alongside the Rugby World Cup). Furious Folly will be presented this summer in Sutton Park co-commissioned by 14-18 NOW for the World War One commemorations.