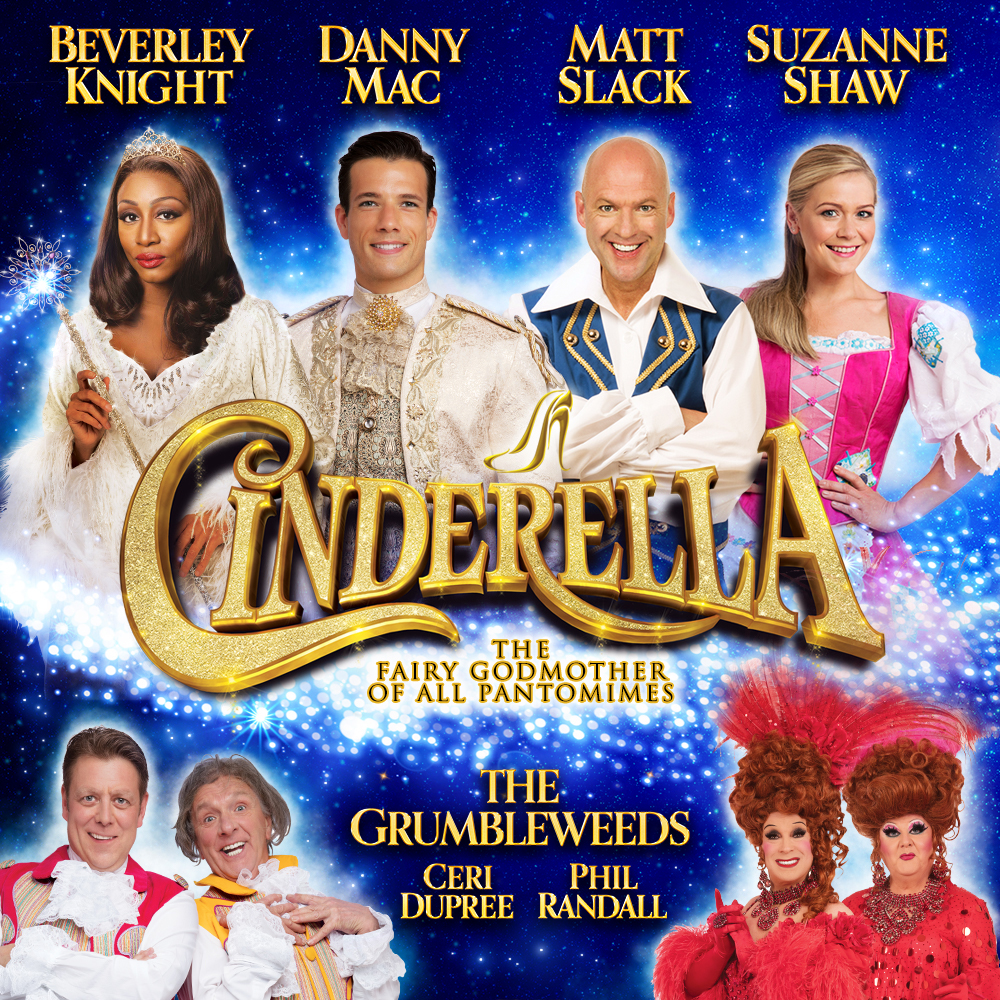 THE FAIRY GODMOTHER OF ALL PANTOMIME CASTS!

A GALAXY OF STAR NAMES ANNOUNCED FOR CINDERELLA AT BIRMINGHAM HIPPODROME

Birmingham Hippodrome has proudly announced that Beverley Knight (in her pantomime debut), Danny Mac, Matt Slack, Suzanne Shaw, The Grumbleweeds, Ceri Dupree and Phil Randall will star in this year’s production of Cinderella, the Fairy Godmother of all pantomimes!

Revealing this year’s casting, Producer and Director Michael Harrison said: “This year’s fantastic line-up will ensure another smash-hit pantomime for Birmingham Hippodrome in 2017/18. With so many stars across the worlds of music, theatre, dance and comedy I’m delighted we’ve assembled such a stellar cast for Birmingham’s ultimate pantomime. Once again there’ll be plenty of laughs, surprises and audience participation to look forward to, so audiences should book their tickets to the ball today.”

Fiona Allan, Artistic Director and Chief Executive of Birmingham Hippodrome said: ‘We are hugely excited to play host to Beverley Knight in her pantomime debut this festive season. Pantomime is incredibly important to us at Birmingham Hippodrome and we’re extremely proud of our longstanding relationship with Qdos, who continue to entertain and delight audiences from across the region year on year with their unique mixture of storytelling, lavish special effects and hilarious comedy. This year’s line-up promises something for everyone, and with the clock already ticking, it’s never too early to start planning in some Christmas fun.’

Soul diva and Midlands-born Beverley Knight will take up her first pantomime role as The Fairy Godmother. The much-loved recording artist, radio presenter and musical theatre actress has been a mainstay of the UK music industry for over 20 years having released eight studio albums and stormed worldwide charts with hits including Get Up!, Shoulda Woulda Coulda, Gold and Come as You Are.

Joining her in the role of Prince Charming is celebrated Strictly Come Dancing finalist Danny Mac. Last year Danny appeared as a contestant on Strictly Come Dancing coupled with Oti Mabuse. The pair reached the finals wowing viewers and panel, and Danny remains the highest ranking male contestant in the show’s long history. Danny recently starred as Gabey in On the Town in the Open Air Theatre, Regent’s Park.

In the title role of Cinderella will be pop and television star Suzanne Shaw, who rose to fame via the popular ITV talent search Popstars and the record-breaking music group Hear’Say. She has appeared in various leading stage roles and pantomimes, and starred as Eve Jenson in ITV’s Emmerdale. In 2008 she won the third series of ITV’s popular skating show Dancing on Ice and participated in the All Stars series in 2014.

Robin Colvill and James Brandon, better known as The Grumbleweeds, will appear as The Broker’s Men. Regulars on the UK comedy scene since the 1960s across radio, television, theatre, cabaret and pantomime the ‘guv’nors’ of live comedy will bring their inimitable style of family entertainment, musical comedy and laugh-out-loud routines to the production.

Completing the line-up will be Ceri Dupree and Phil Randall as the Ugly Sisters. For the first time Ceri and Phil will come together as the ultimate Ugly Sister pairing, bringing a wealth of panto experience and sensational costumes having impersonated the world’s biggest divas and entertaining thousands of theatregoers every Christmas.

Once again this year’s pantomime will be produced by Qdos Entertainment, the world’s biggest pantomime producer, with Michael Harrison as Producer and Director for the eighth consecutive year. Having recently brought his hugely successful productions of Funny Girl and The Bodyguard to Birmingham Hippodrome.

Audiences shall go to the ball this Christmas as Cinderella transforms from rags to riches, outwits her very Ugly Sisters, and with the help of her hilarious friend Buttons and one very magical Fairy Godmother, wins the heart of the dashing Prince Charming. Cinderella will feature all of the ingredients of the perfect Hippodrome pantomime: a fabulous cast and orchestra, laugh-out-loud comedy, stunning scenery and special effects, beautiful costumes and plenty of boos and hisses for all the family to enjoy.

The clock is ticking…book your tickets to the Ball today!