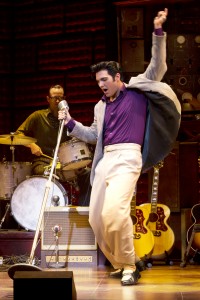 On December 4, 1956, history was made when these four young musicians gathered at Sun Records in Memphis for what would be one of the greatest impromptu jam sessions ever. It brings to light the extraordinary story of broken promises, secrets, and the once-in-a-lifetime celebration of four friends that is both poignant and heartwarming.

Million Dollar Quartet brings that legendary night to life, featuring a score of hits which bring you inside the recording studio with four major talents who came together as a red-hot rock ‘n’ roll band for one unforgettable night.

In 1966, exactly ten years later, Jerry Lee Lewis flew from the USA to tour the UK stopping off at Birmingham Hippodrome for a one night concert.

Million Dollar Quartet is written by Tony Award nominees (Best Book of a Musical for Million Dollar Quartet) Colin Escott and Floyd Mutrux and produced by Simon Friend and Mark Goucher. Olivier nominated Ian Talbot OBE, renowned for his tenure as both Artistic and Managing director at The Open Air Theatre in Regent’s Park directs. Casting is to be announced.