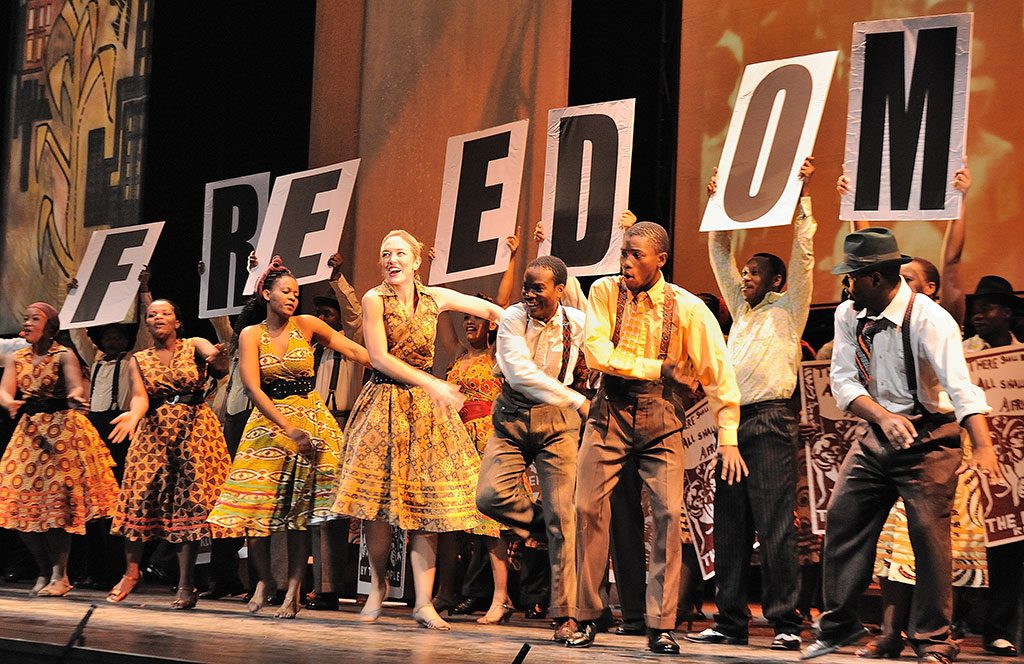 Celebrating the life of a man who touched the hearts and minds of people around the world, the internationally acclaimed Cape Town Opera return to Birmingham Hippodrome this September with Mandela Trilogy – a musical tribute to the life of Nelson Mandela from Tues 20 – Wed 21 Sep.

Written and directed by Michael Williams with music by Peter Louis van Dijk and Mike Campbell, Mandela Trilogy was first performed in 2010 as part of Cape Town’s Opera Season. The production had its European premiere at Wales Millennium Centre in 2012. Since Nelson Mandela’s passing in December 2013, the production has toured to Durban, Cardiff, Johannesburg, Munich and Ravenna.

Graeme Farrow, Artistic and Creative Director at Wales Millennium Centre said “Following its debut performances and fantastic reception at Wales Millennium Centre in 2012, we are delighted to be presenting Cape Town Opera’s Mandela Trilogy on a UK and Ireland tour. Showcasing the talent of the hugely gifted Cape Town Opera’s company, this production will offer audiences a wonderful spectacle with its exceptional cast, award-winning chorus and original score.”

Fiona Allan, Chief Executive of Birmingham Hippodrome added “I’m thrilled to welcome Cape Town Opera for what will be their third visit to Birmingham Hippodrome following their success with both Porgy and Bess in 2012 and Showboat in 2014. As Artistic Director of Wales Millennium Centre, I was fortunate enough to be present for both the world premiere performance of Mandela Trilogy in Cape Town in 2010 and its European premiere in Cardiff and cannot recommend the work of this trailblazing company highly enough.”

From tribal initiation rites on the banks of the Mbashe River, through the heady and rebellious jazz-fuelled days in Sophiatown, to incarceration and reflection on Robben Island and finally beyond, to freedom – this is the story of one of the world’s most iconic figures.

The amazing life of Nelson Mandela is brought vividly to the stage by Cape Town Opera in a large-scale celebration of the life of one of the world’s foremost icons.

Told in three parts by a cast and orchestra of over 60 South African performers, the music matches the vastly different phases of Mandela’s journey from freedom fighter to president.  The upbeat jazz and swing-influenced songs of Sophiatown are framed by musical styles more familiar in contemporary opera – with a dash of Xhosa folk music that grounds the production in its African roots.

Written by two different composers, each Act is in stark contrast to the others, but with an over-arching dramatic theme that shines a light on the life of an extraordinary man.

A strategic partnership has been created between a spirited opera company and a landmark arts centre, aimed at strengthening cultural links between Wales and South Africa.

The agreement between Wales Millennium Centre and Cape Town Opera cements their ongoing relationship and strengthens the Centre’s association with South Africa’s only repertory opera company. The company is South Africa’s largest performing arts organisation. They made their UK debut at the Centre with a performance of Porgy and Bess as part of the Centre’s 5th birthday celebrations in 2009.

By working together, both organisations aim to provide a platform for cultural exchanges. This will include opportunities for collaborative working with other arts companies and the potential to increase access to opera performances for audiences in Wales, the rest of the UK, Ireland and South Africa.