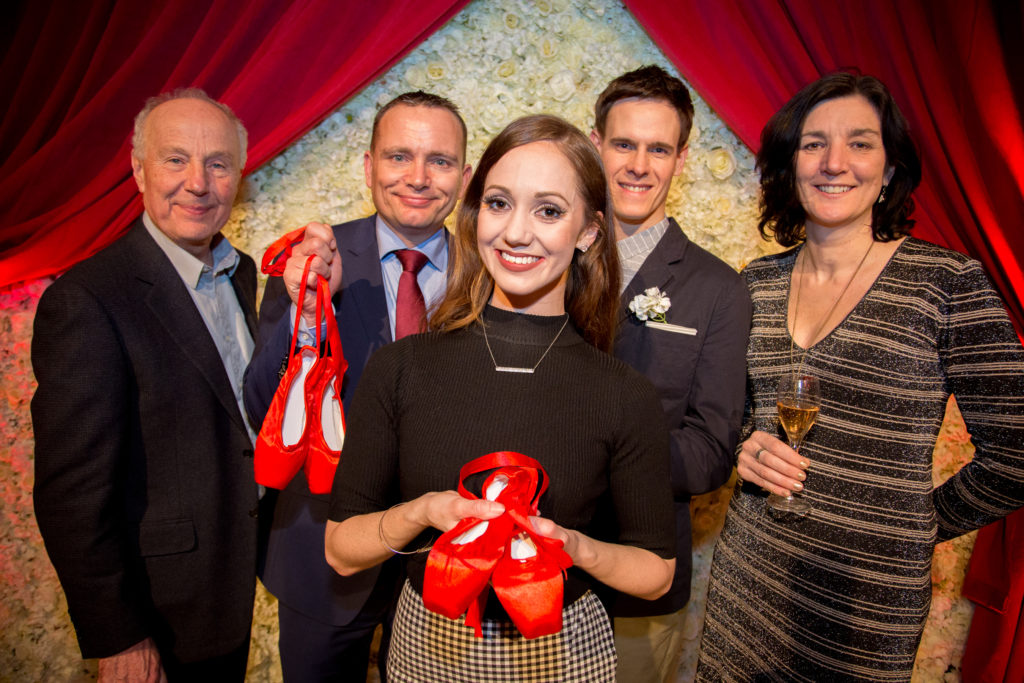 The show itself played to a sell-out crowd over seven performances attracting more than 25% first-time bookers.  And the fundraising events were supported by over 500 guests across four stylish nights of celebration.

Over £15,000 was raised for the theatre’s award-winning Hippodrome CREATIVE programme of learning, access and free community performance, which delivers inspiring arts experiences for young people, vulnerable adults and families across the region.

Opening the week, at a SimkissGuy Leading Ladies reception of networking and cocktails, supported by evening sponsors Marketing Birmingham, guests got up close with the show’s creator Sir Matthew Bourne and three professional dancers for a pre-show Q&A compered by award-winning broadcaster and presenter Marverine Cole.

The following evening, dance students from top regional academies and colleges performed a special Curtain Raiser to a packed house ahead of the main public performance.  Now in its eighth year, The Curtain Raiser – which was sponsored for the second time by Tilney – has become a regular feature of Matthew Bourne’s Hippodrome week. Produced in association with Re:Bourne, the charitable arm of New Adventures, the performance (entitled ‘Journey’) featured choreography by the young people, supported by Re:Bourne associate Alan Vincent and the Hippodrome’s lead dance practitioner, Clare Palethorpe. The Curtain Raiser performance featured 16 dancers and four choreographers, aged 12-19, from Stratford-upon-Avon College, Walsall College, BOA, BMET College and ACE Dance & Music inspired by themes from The Red Shoes.

A Red Shoes Corporate Dinner saw over 160 guests from Birmingham’s business community enjoy a night of first-class dining, vintage glamour and world-renowned dance in support of 5,000 youth dance opportunities at the Hippodrome and in the wider community.  Birmingham Hippodrome was also thrilled to host its first ever Gala Fundraising Dinner for individual supporters and dance lovers which included speeches from Chair of the Board of Directors, John Crabtree OBE, DL, D.Univ and Artistic Director and CEO of Birmingham Hippodrome, Fiona Allan.

Working in partnership with Re:Bourne – students of Hodge Hill Primary School treated Saturday matinee audiences to a three minute pop-up performance of The Little Shoes, a new initiative by Hippodrome Creative, aimed at introducing young children to  dance and in particular the work of Sir Matthew Bourne.

Martin Guest, Chair of Birmingham Hippodrome Theatre Development Trust said: “We have been overwhelmed by the generous response to our sell-out Red Shoes fundraising events.  We are delighted so many of our current and new supporters donated so generously to Hippodrome CREATIVE.

“As an independent charitable trust receiving no public subsidy, the theatre offers much more than meets the eye – we currently reach over 100,000 children, young people and families every year with our free festivals and workshops in schools and communities.  By supporting events such as these, guests are playing a significant part in helping us fulfil our long-term ambition of reaching over 500,000 people annually through our CREATIVE programme.  We are very grateful to all our sponsors, table bookers, audiences and other donors for helping us to raise so much.”

Graham Callister, Birmingham Hippodrome’s Director of Creative Programmes, added: “We were delighted to present our eighth Curtain Raiser here at the Hippodrome. Since 2009, we have worked with over 175 young dancers and 35 rising choreographers to develop their dance skills, some of whom have gone on to join professional dance companies such as Northern School of Contemporary Dance and Rambert.”

There is another chance to see The Red Shoes when it returns to Birmingham Hippodrome from Wed 19 – Sat 22 July 2017 and tickets are now on sale.  Charitable donations can still be made to the Hippodrome on 0844 338 5000 (calls cost 4.5p/min plus your phone company’s access charge) or online at birminghamhippodrome.com/donate

Notes to Editors: Birmingham Hippodrome is an independent, not-for-profit, registered charity (No. 510842) welcoming an average 500,000 visits annually making it the most popular single auditorium in the UK. Birmingham Royal Ballet and DanceXchange are resident partners; the theatre presents all of Welsh National Opera’s repertoire, and welcomes the best in international dance, major touring dramas, West End musicals and one of the UKs biggest pantomimes. It also houses the 200-seat Patrick Centre, with extensive events facilities, and its own restaurant.

Through Hippodrome CREATIVE we deliver successful projects in education and the wider community.  With numerous supportive partners we have recently co-produced and produced new events including The Voyage (for the London 2012 Cultural Olympiad), Minimum Monument, Summer in Southside, About Town (for the Ikon Gallery’s 50th Anniversary), the 4 Squares Weekender (for the opening of the Library of Birmingham), Blitz, Birmingham Weekender (celebrating the opening of New Street station and Grand Central alongside the Rugby World Cup) and Furious Folly in Sutton Park, a co-commission with 14-18 NOW, commemorating the First World War centenary.

Investing in the future of dance and theatre, Re:Bourne, the charitable arm of New Adventures, was formed in 2008. Every year Re:Bourne engages in inclusive projects with thousands of people of all ages and ability, as well as emerging artists across the UK. Projects have also been delivered in China, Singapore, Japan, South Korea and across the USA.

In 2014, the national tour of Lord of the Flies visited 13 cities, engaging over 8,000 young people in dance activity, many for the first time, delivering 80 performances and reaching some 75,000 people as audiences. Following the success of the show in the UK the production will have its first international season at Arts Centre Melbourne, Australia in 2017.

As part of Re:Bourne’s work with emerging talent the New Adventures Choreographer Award was launched in 2010 to support and encourage the next generation of dance-makers. It has become one of the most prestigious and sought-after choreography awards for new artists and biennially showcases the work of a young choreographer. Re:Bourne continues to work with universities and conservatoires to support the next generation of artists as well as, Overture, an exceptional professional development opportunity for dance practitioners working in communities across England.

Re:Bourne delivers a range of diverse projects to support health and wellbeing. In partnership with Dementia Pathfinders, Re:Bourne works in care homes to lead dance workshops for people living with dementia.