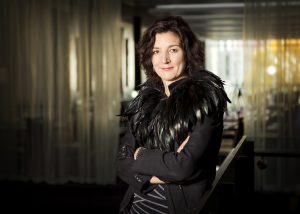 Birmingham Hippodrome has confirmed that FIONA ALLAN will become its new Chief Executive in the autumn. Current CEO Stuart Griffiths OBE moves to Ambassador Theatre Group in July, as announced in January.
Fiona Allan has had over 20 years experience in the cultural sector, with a career that spans both artistic and organisational leadership. She has been Chief Executive of Leicester’s acclaimed Curve Theatre since 2011, before which she was Artistic Director of Wales Millennium Centre. A native Australian, her career started at Sydney Opera House where she was Head of Programming, before being appointed CEO of Sydney Film Festival.

Fiona has led a programme of organisational expansion at Curve, overseeing the development of a new artistic strategy and a growing reputation for supporting new musical theatre, the expansion of its conference and events business, and the development of a comprehensive programme of community and learning activity. Under her leadership Curve has enjoyed financial success and is now recognised as a leading visitor attraction for the region, and a driver of Leicester’s social, cultural and economic development. Fiona sits on the national boards of UK Theatre and Dance Consortium UK.

Announcing Fiona’s appointment, Birmingham Hippodrome Theatre Trust Chair, John Crabtree said: “We are delighted that Fiona has agreed to join us at such an exciting time in our continued growth. Our diverse programme and loyal audiences, our fantastically engaged education and community programmes, and our commitment to world-class standards in all that we do puts us in the perfect position to achieve future ambitions with like-minded partners under Fiona’s leadership. With my fellow Trustees and the whole team at the Hippodrome, I look forward to working with Fiona as we enter a new phase in our history.”

Fiona Allan added: “I could not be more thrilled to be joining the brilliant team at Birmingham Hippodrome at this exciting moment in the venue’s journey. It’s a nationally acclaimed organisation with infinite potential that has achieved so much under Stuart Griffiths in recent years, and I feel privileged to have the opportunity to be part of its, and Birmingham’s, future. At the same time, after an extraordinary four years at Curve, it is with sadness that I say goodbye to the many wonderful friends and colleagues I have made here. I leave in the knowledge that the organisation is in terrific shape, and that Artistic Director Nikolai Foster has exciting plans for further developing its reputation as a producing powerhouse.”

Birmingham Hippodrome is at the heart of Birmingham’s cultural life, enjoying record-breaking paid admissions last year exceeding 625,000. With the leading producers, it presents a wide range of musicals, international dance and ballet, opera, drama and comedy, and the world’s biggest Pantomime. With its resident partners Birmingham Royal Ballet and DanceXchange, the theatre is firmly established as a centre for dance, co-producing the award-winning International Dance Festival Birmingham since 2008.