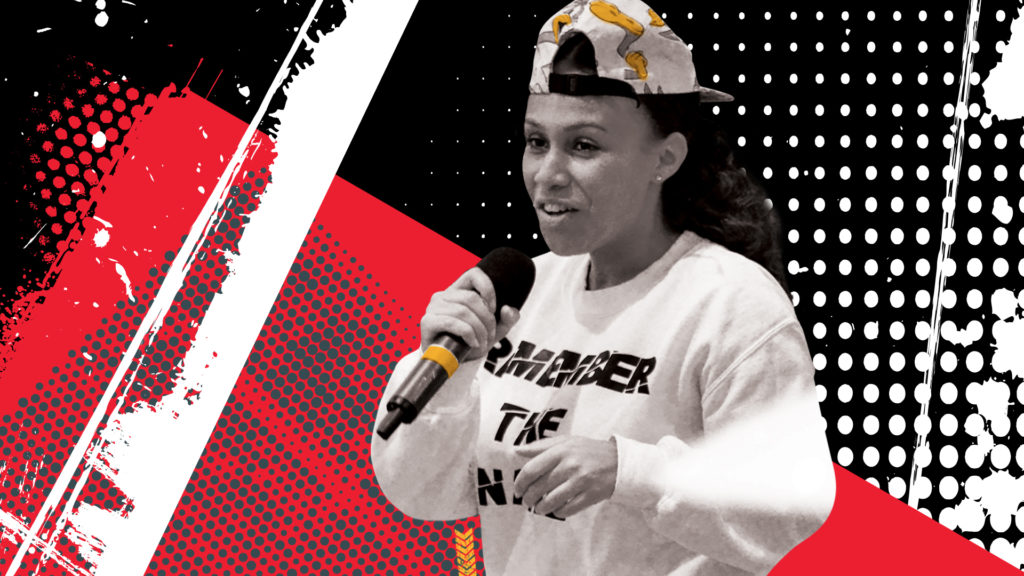 B-SIDE HIP-HOP FESTIVAL IS BACK!

Following the success of the city’s first, annual Hip-Hop Festival in 2016, Birmingham Hippodrome is thrilled to announce that B-SIDE Hip Hop Festival will be returning in 2017.

Produced in partnership with local hip hop artists Break Mission, Juice Aleem, Mickeal ‘Marso’ Riviere, and Graffiti Artist.com, B-Side Hip-Hop Festival will, once again, see the streets of Southside filled with the sights and sounds of contemporary hip-hop culture in a three-day event featuring some of the biggest names in local and international Hip-Hop talent

The festival will take place across the weekend of the 19-21 May and will feature a range of exhilarating outdoor performances, pop-up dance events, rap-battles, interactive talks and live graffiti art alongside an explosive programme of street dance, high-energy workshops and the Break Mission x Just Jam Int. finals which saw top national bboys, bgirls and all style dancers battling for the chance to win a place in the international championships.

Last year’s B-Side Hip-Hop Festival attracted over 5000 visitors to Southside, bringing together over 70 performers, wordsmiths and artists from across the city plus an additional 150 local street dance competitors from across the UK.

Highlights from last year’s festival included The Hip Hop Conversation, a city-wide symposium hosted by local MC and rap artists Juice Aleem and DJ Silence exploring Birmingham’s independent and vibrant contribution to global Hip Hop culture, the Break Mission x Just Jam International regional finals which saw b-boys and b-girls from across Birmingham compete in 1 vs 1 ‘poppin’ and ‘breakin’ battles for the chance to win a place in the national championships and a specially-commissioned contemporary Hip-Hop dance piece by Birmingham-based theatre company Frantic Assembly created by ‘Ignition’ in partnership with the Old Rep, the company’s UK wide training programme for young men aged 16-20.

Graham Callister, Birmingham Hippodrome’s Director of Creative Programmes said: “We are delighted to once again to bring Southside to life through B-SIDE Hip Hop Festival.  Working with some amazing national and internationally respected artists, performers and partners, last year’s pilot event brought huge numbers of participants and new audiences to the district through a mix of free performances and events. We recognise that Birmingham and the wider Midlands region has a long association with and demand for Hip-Hop culture, from the production of artists and performers to music producers and audiences. Through B-SIDE Hip-Hop Festival, we want to provide a platform to engage with and celebrate today’s talent from the city region and further afield.”

Mickael ‘Marso’ Riviere, independent choreographer and founder of Company Decalage said: “I’m excited to be working on this second edition of the festival as it brings old and new generations together, from the city and far beyond, the energy is terrific!  BSide is setting a new standard for representing the city and its Hip hop culture as well as bringing other art forms together into one platform. I am looking forward to see how much progress returning competitors have made and also to present a new edition of the Experimental battles with more live musicians…”

Birmingham Hippodrome is an independent, not-for-profit, registered charity (No 510842).  The Hurst Street venue averages over 500,000 visits annually making it the most popular single auditorium in the UK.  With no core public revenue funding, it counts Birmingham Royal Ballet and DanceXchange as resident partners; presents all of Welsh National Opera’s repertoire; welcomes the best in international dance, major touring dramas, West End and Broadway musicals; and is home to one of the UK’s biggest Pantomimes. It also houses the 200-seat Patrick Centre for the Performing Arts.

Through Hippodrome CREATIVE we deliver successful projects in education and the wider community.  With numerous supportive partners we have recently co-produced and produced new events including Minimum Monument, The Voyage, About Town, Blitz, the 4 Squares Weekender, Birmingham Weekender (celebrating the opening of New Street and Grand Central alongside the Rugby World Cup).

Break Mission is a Hip-Hop events and educational Community Interest Company that brings people together to experience a cultural understanding of what the Hip-Hop community is really about. They also raise awareness of the homeless situation in our local community through dance, music and art – and as a way of giving back, clothes and food donations for the homeless are entry to the events themselves.

The original concept of Break Mission was inspired by a Break Dance event which was held in Bronx, New York by Aby from The Bronx Boys rocking Crew 1975 original concrete rocking crew and it required no entry fees but food and clothes.

Born in France, Mickael ‘Marso’ Riviere is an award-winning choreographer. For the last 17 years he has lived in the UK and established himself as a major force in both the contemporary and bboy dance worlds, producing events and touring original works.

Marso is the founder of Company Decalage, Bboy’s Attic and Imagery fromMarz Photography and an active member of West Midlands leading Breakin’ Crews MDK and TBB75 UK which compete internationally.

Since 1998 Graffiti Artist’s mission has been to educate, entertain and inform everyone in the art of graffiti – all run by Birmingham artists.

Graffiti Artist educates people about the positive side of graffiti, with workshops available for schools and youth centres in Birmingham, all aimed at spreading the word about this amazing and expressive art form.

Juice Aleem has long been acknowledged as one of the finest MCs the UK has ever produced. In addition to his work as a member of the groups New Flesh and The Infesticons, Juice Aleem has also worked with Coldcut, Hexstatic, Adam Freeland, Dj Kentaro and many, many others.

He is also the voice of Alpha Prhyme, the MC featured on the very first Big Dada single, “Misanthropic.” In 2009, he released his first solo album, once again via Big Dada, entitled “Jerusalaam Come”.

Juice Aleem’s long-awaited double album “Voodu Starchild” was released via Gamma Proforma in September 2016, and his first book, ‘Afrofutures and Astro Black Travel: A Passport to a Melanated Future’ arrived in the same month.  Juice Aleem continues to be a powerful force both live and on record, as good for the initiated and the brand new alike.