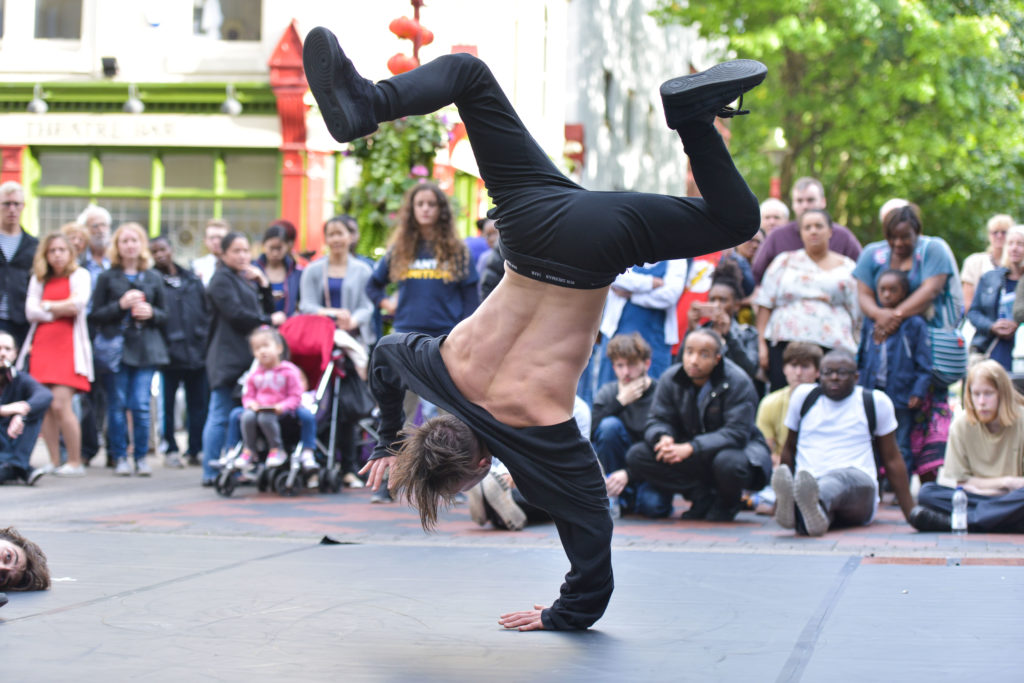 World-class ‘Graffiti’, international dance stars, award-winning rap artists plus the biggest names in Birmingham’s home-grown, hip-hop talent– these are just some of the highlights audiences can look forward at this year’s B-Side Hip-Hop Festival.

Produced by Birmingham Hippodrome in partnership with artists Break Mission, Juice Aleem, Mickeal ‘Marso’ Riviere, and Graffiti Artist.com, B-Side Hip-Hop Festival will, once again, see the streets of Southside filled with the sights and sounds of contemporary hip-hop culture in a three-day event featuring some of the biggest names in local and international hip-hop talent.

The festival will take place across the weekend of the 19-21 May and will feature a range of exhilarating outdoor performances, pop-up dance events, interactive talks and live graffiti art, alongside an explosive programme of street dance, high-energy workshops and battles.

Last year’s B-Side Hip-Hop Festival attracted over 5000 visitors to Southside, bringing together over 70 performers, wordsmiths and artists from across the city, plus an additional 150 local street dance competitors from across the UK.

The festival opens on Friday 19 May with a Welcome Jam and Launch Party hosted by Birmingham MC and rap artist Juice Aleem and DJ Silence and featuring leading speakers and performers from both the city and wider international stage including Prit, Nucleo, T-Kid, Boogie Frantik, PoeOne, Link, IMD, Bubbles and Sic-Nis among others. An ideal introduction to the weekend, the event will explore Birmingham’s independent and vibrant contribution to global hip-hop culture, from its pioneering MCs, rappers, graffiti artists, word poets, producers and bboy/girls, to the present day issues faced in developing the scene and art form in Birmingham and beyond.

Returning for the 2nd year running,  Birmingham-based hip-hop youth charity Break Mission are back with two exciting days of dance battles in Break Mission x Just Jam Intl 2017. From Breaking, Hip Hop and Poppin’, to MCs and DJs, this explosive event promises to be the ultimate hip-hop experience. This will be followed by the return of the infamous Bones To Stones bboy breakdance battles on Hippodrome Square, an epic battle through concrete to be crowned number one on the floor!

Entry to all Break Mission events operates on a ‘Donate to Participate’ basis. All non-perishable food or recycled clothing donations will go towards supporting the work of Sifa (Supporting Independence from Alcohol) Fireside, Birmingham.

Talented bboys and bgirls from across Birmingham will be given a second chance to shine in the 7 To Smoke solo breakin’ battle, a secret selection giving underdogs from Break Mission’s Just Jam qualifiers the chance to battle head-to-head on the Hippodrome’s Main Stage on Sunday and be recognized at last! Meanwhile, wannabe rap artists are invited to showcase their spoken word skills in 7 To Spoke – a fast-paced and fearsome battle between seven participants fighting to be crowned king and queen.

This year’s festival will also feature a specially-commissioned performance of Benji Reid’s internationally-acclaimed dance work, The Holiday – a thrilling study of the darker emotional territories of Hip-Hop told through a combination of poetry, dance, live music and song.

Festival Producer and Birmingham-born rap artists Juice Aleem will be shining a spotlight on Afrofuturism, past, present and future in Afroflux, a specially curated series of talks, workshops and live performances exploring Afrofuturism’s many connections to hip-hop sub-culture.

Bringing together the best in local and international DJ and MC talent, this year’s festival will also feature live music sets from Birmingham MC and rap artist Lady Sanity plus Quartz, Strange U, DJ Latifah, DJ Nucleo and many more.

Brand new for 2017, this year’s festival will also see graffiti artists from across the globe take over Southside for a full weekend of live street art and interactive workshops taking place across the Hippodrome’s Main Foyer spaces and surrounding city streets.

Headed by the legendary T-Kid from New York plus Birmingham-based ‘Graff’ talent Graffitiartist.com, this year’s Graff Jam will welcome artists from as far afield as the USA, Italy, Sweden, Ireland and London alongside the best of Birmingham’s home grown ‘Graff’ talent.

Festival sponsors POSCA will be on hand to provide a series of free, interactive Graffiti workshops in our PwC Suite on Saturday where visitors will be given the chance to create their own striking and inventive graffiti letters using childsafe POSCA pens.

Other workshops taking place across this year’s festival include Sweat The Technique master-classes in Breaking, Poppin’ and hip-hop lead by PoeOne, Boogie Frantik and Link Bink, an introduction to the history of masquerade and ‘Neo-Mmanwu’ with Florence Okoye, an exploration of ‘Women, Hip-Hop and Afrofuturism’ with Latifah Stone and a four day hip-hop research lab curated by Festival Producer and award-winning choreographer Mickeal ‘Marso’ Riviere for semi/professional and emerging Hip-Hop artists, running from 15-19 May in DanceXChange.

Seeing the weekend out in signature style on Sun 20 May, the B-Side Hip-Hop Festival Finale will see the cream of B-Side 2017 come together for an afternoon of live performances and battles on the Hippodrome Main Stage. Highlights include sets from Birmingham MC’s Quartz and Lady Sanity as well as preliminaries and finals of competitions including Bonnie & Clyde, 2v2 and Dirty 30s. For the first time ever, this year’s finale performance will play host to the Midlands Street Dance Crew 4Real finale, in which talented street dance crews battle it out to be crowned the ultimate champion.

Festival Producer and award-winning choreographer Mickeal ‘Marso’ Riviere said: “This year’s B-Side Hip-Hop Festival promises to be bigger than ever before. As well as providing a platform for emerging and established hip-hop talent here in Birmingham, this year’s festival features an incredible line-up of international artists, including the legendary T-Kid from the Bronx among others. Building on the success of its early pioneering artists, performers and producers, and more recent large-scale events in the city, Birmingham is once again re-establishing itself as an important global producer and consumer of all things hip-hop”.