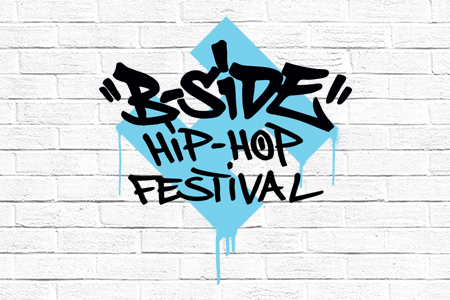 This new initiative builds on a range of grassroots hip-hop events and projects with the principal aim of providing a platform for Birmingham and the wider region’s local talent to take part and perform.  The festival takes place across the weekend of the 23 – 25 September and features a range of outdoor ‘pop-up’ performances, sci-fi film, spoken word, talks and graffiti artists alongside more explosive street dance crews and b-boys/b-girls battling it out for cash prizes.

The festival opens on Friday 23 September with a Hip-Hop Conversation and Q&A hosted at The Old Rep exploring Birmingham’s local to global hip hop stories and the journeys of its pioneers to the present day, supported by city-region DJs, emcees and performers including Rose One, BOM 5, Chief 69, Buddha Stretch and Focus.

On Saturday 24 September the festival comes to life with a day of youth-driven performances and workshops at The Old Rep, co-ordinated by Dance Nuvo who are hosting international artists Caramel and Steady from Flawless Dance Crew at The Old Rep, with an appearance from fresh new hip-hop legends Terra and Eddie.

Break Mission will be hosting their Just Jam International qualifier heats, where performers are required to donate food and/or clothes for local homeless charities in order to participate, with the chance to win travel and accommodation for the Just Jam International Finals and SDK 2017. Performances will be judged by Focus of FlowMo Crew (Finland), Buddha Stretch (US), Gabor of Enemy Squad (Hungary) and BBoy Mouse (UK).

Further ‘pop-up’ performances will take place in and around the city with West Midlands based B-boys and choreographers Marius Mates and Andrei Roman with “Irreversible”, a Hip-Hop Theatre duet packed with Breakin’ movement at its finest! Si Rawlinson presents his new solo “Finding Words” and Frantic Assembly present a new piece made in Birmingham by trialists and graduates of their Ignition talent development programme at New Street Station and on the streets of Southside. Marso Riviere’s ‘KRE8!’ will see creative all-styles 2 v 2 dance battle, and Southside Producers, a dynamic and diverse group of young creatives, present hip-hop inspired performances by local dancers, musicians and spoken word artists, identified through an open callout.

Saturday evening sees the event move to Birmingham Hippodrome hosting one of Birmingham’s finest MCs, rapper and writer Juice Aleem’s ‘AFROFLUX’ – a series of talks, poetry and film inspired by black sci-fi and Afrofuturism, leading to a House Party which will close the Saturday programme.

Sunday 25 September is the main event, with all artists, judges, hosts and DJs taking over the Birmingham Hippodrome‘s foyer spaces and Patrick Centre with the Break Mission x Just Jam International semis and finals and Dance Nuvo hosting an All-Style Youth Battle. The day will also include the notorious ‘Bones-to-the-Stones’ battle on concrete with more prizes to be won, and ‘7-to-Spoke’ a new rap/spoken word battle, following performances from Beatfreeks’ ‘Verbalise’ programme in partnership with YAY16, Birmingham’s Year of Arts and Young People. Birmingham Breakin’ crew MDK will celebrate its 10th anniversary over the weekend, and to top it off, some of the best graffiti artists will be creating works on the Hippodrome Piazza, led by local graff legend Panda / Flake.

A mix of free and paid for House dance and hip-hop workshops will be available in advance and during the weekend, and a series of hip hop choreographic dance ‘labs’ for professionals, with leading dance artist and choreographer Marso Riviere. These labs will lead to several curated performance opportunities over the weekend.

“Break Mission is incredibly excited to be working with the Hippodrome and its partners, bringing its workshops and battles to the city’s Southside. There will be invites to performers across Europe and America making this an event not to be missed. We will also be collecting clothes and food for local homeless charity partners instead of an event entry fee.”

“We recognise that Birmingham and the wider Midlands region has a long association with and demand for Hip-Hop culture, from the production of artists and performers to music producers and audiences.  Through the new B-SIDE Hip-Hop Festival we want to provide a platform to engage with and celebrate today’s talent from the city region and further afield.”

More information can be found at birminghamhippodrome.com/bside or interest can be registered for the Open Call, individual events and workshops at www.facebook.com/bside2016/events

Birmingham Hippodrome is an independent, not-for-profit, registered charity (No 510842).  The Hurst Street venue averages over 500,000 visits annually making it the most popular single auditorium in the UK.  With no core public revenue funding, it counts Birmingham Royal Ballet and DanceXchange as resident partners; presents all of Welsh National Opera’s repertoire; welcomes the best in international dance, major touring dramas, West End and Broadway musicals; and is home to the world’s biggest Pantomime. It also houses the 200-seat Patrick Centre for the Performing Arts.

B-SIDE Hip-Hop Festival builds on Colours of Hip Hop presented in August 2015 as well as the Open Art Surgery and Breakin’ Convention.