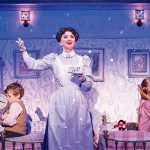 Mary Poppins the Musical stars Zizi Strallen (Matthew Bourne’s “The Car Man”, Cats, Rock of Ages, Dirty Dancing) as Mary Poppins. Zizi recently won a National Dance Award for Outstanding Female Performance (Modern) for her portrayal of Lana in The Car Man. She is joined by Australian actor Matt Lee (Miss Saigon, The Witches of Eastwich, Rent, Grease) who plays Bert. Matt, who was a judge on Australia’s popular TV show So You Think You Can Dance, first played the role when they show opened in Australia and won a prestigious Helpmann Award for Best Actor in a Musical for his portrayal of Bert.

Sir Cameron Mackintosh said “I’m delighted to be bringing Mary Poppins back to Birmingham after spreading her magic around the world.  Since we originally staged the production we have found even more magical ways to stage this timeless tale.”

Adapted from the wonderful stories by PL Travers and the beloved Walt Disney film, the stage production of Mary Poppins has a timeless score by Richard M Sherman and Robert B Sherman including the songs Jolly Holiday, Step in Time, Supercalifragilisticexpialidocious and Feed the Birds with new songs and additional music and lyrics by the Olivier award-winning British team of George Stiles and Anthony Drewe.
The stage production of Mary Poppins originally opened in 2004 and ran in the West End for three years and over 1,250 performances. During this time it won the Olivier Award for Best Theatre Choreography and Best Set Design as well as the Evening Standard Award for Best Set Design and the Variety Club Award for Best Musical. The Broadway production ran for over six years where it won the Tony Award for Best Set Design. The show has subsequently played to great success in Holland and Mexico. It has toured Australia, New Zealand, the U.S, and UK and has been seen by over 11 million people and is currently breaking box office records in Vienna.