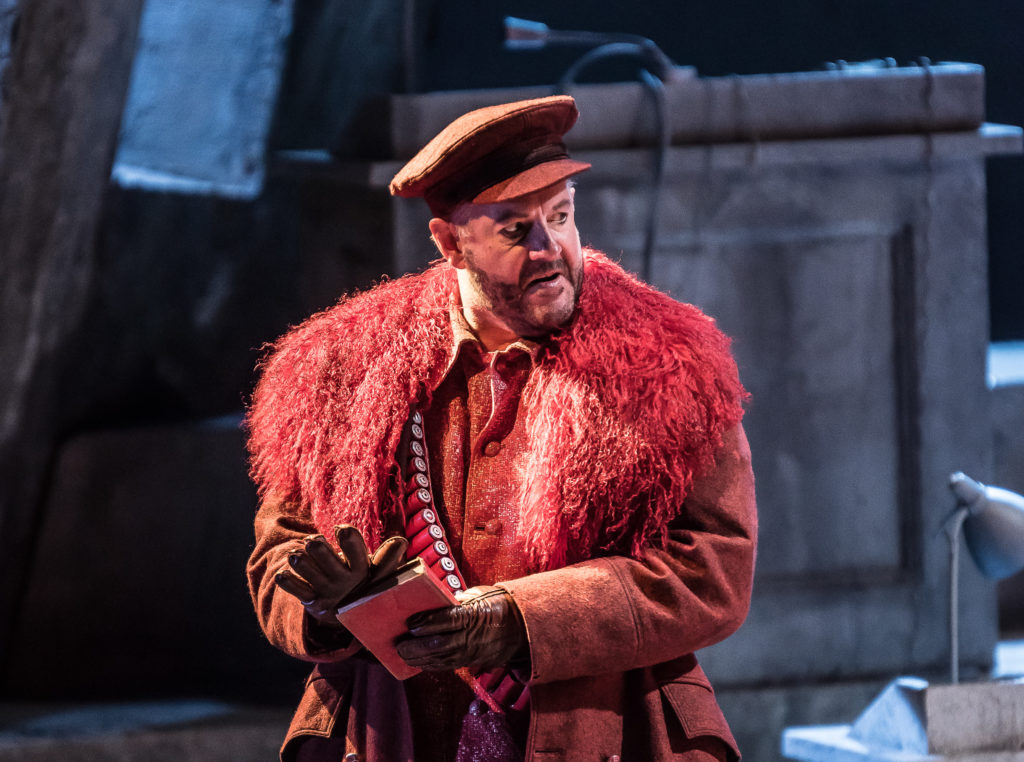 This autumn, Welsh National Opera return to Birmingham Hippodrome with a major presentation of three epic Russian-themed works which marks the centenary of the Russian Revolution.  Performing from 31 October – 4 November, the Company will bring its productions of Musorgsky’s Khovanshchina, Tchaikovsky’s Eugene Onegin and Janáček’s From the House of the Dead, based on the book by Dostoevsky to the city.

Alongside these are two more chances to see Johan Strauss’s Die Fledermaus, this time with Judith Howarth taking the role of Rosalinde.

First to be performed is Khovanshchina which highlights the central dilemma of Russian cultural identity which is still common today: whether to face East or West.  Set against the Moscow Uprising of 1682, Khovanshchina sees the country in turmoil with the struggle between a romanticised past and modern reform.

This is the first revival of David Pountney’s 2007 production, and will see the return of Robert Hayward in the role of Prince Ivan Khovansky and Adrian Thompson in the role of the Scribe.  They will be joined by Mark Le Brocq as the Westernised aristocrat, Prince Vasily Golitsyn, and Miklós Sebestyén as religious fundamentalist, Dosifei.

Evoking the elegance of early 19th century St Petersburg alongside simple countryside settings, Eugene Onegin follows the cynical protagonist as he rejects the romantic advances of the young country girl Tatyana, before later coming to regret his actions and feeling the sting of rejection himself.  Considered one of the greatest Russian operas, Tchaikovsky’s music reflects the high society of the time and the yearnings of the heart with evocative arias, romantic choruses and luscious waltzes.

This revival of James Macdonald’s original production will be directed by Caroline Chaney and conducted by Latvian Ainārs Rubikis who has recently been announced as the new Music Director of Komische Oper Berlin.  Rising star and Welsh singer Natalya Romaniw takes the role of Tatyana, and Nicholas Lester returns to WNO following his performances in the Figaro trilogy in 2016 to take the role of Onegin.  Also joining the cast are Jason Bridges (Lensky), Helen Jarmany (Olga), Miklós Sebestyén (Prince Gremin) and Sara Fulgoni (Filipyevna).

From the House of the Dead will be a revival of WNO’s original 1982 production, this time in a new critical edition by musicologist John Tyrrell with performance suggestions by Charles Mackerras.  Unfinished at the time of Janáček’s death, this will be the first time that the opera will be performed in a version that is as close as possible to what Janáček intended.

Telling the story of the inmates of a Siberian prison, the opera reflects their feelings of pain, oppression and injustice as each recount why they ended up in jail.  Their gloom is eased as they painstakingly nurse an eagle back to health, which comes to symbolize both Russia and the notion of freedom.

Tomáš Hanus says: “WNO’s ‘Russian Revolution’ season reflects the soul of Russian people, culture and thinking, as well as the history. It is very important for us at this point in history to be touched by this subject, as it is sending a very specific but universal message. The extraordinary beauty and immense power of the music of great Masters like Tchaikovsky, Musorgsky and Janáček puts us right at the heart of this Russian phenomenon and brings it alive in front of our eyes.

“I really cannot wait to be working on Khovanshchina and From the House of the Dead with our fantastic orchestra, chorus and all the soloists, and to share this with our audience. I am sure that together we will all experience an exceptional and very emotional season that will deeply enrich our lives.”

Talking about the Russian Revolution theme, WNO Artistic Director David Pountney says: “After the intellectual and artistic euphoria that led to an explosion of creativity immediately post the revolution, the brutal realities of Lenin’s and Stalin’s regimes meant that putting pen to paper became an increasingly dangerous act. The result is that though there was an enormous amount of musical activity in Soviet Russia, there are no significant operas about the revolution itself.  Our approach has been to present three works that in very different ways illustrate the enduring character of Russians and Russian society.

“The most endearing is Russia the romantic, as illustrated by Eugene Onegin, an unbearably touching story in which Pushkin’s Mozartian sense of irony is overlaid by Tchaikovsky’s unrestrained passion. The most telling politically is Khovanshchina which deals with the interplay between sadly familiar forces: over mighty war lords or oligarchs (Khovansky), religious fundamentalists (Dosifei), Westernizing liberals (Galitsin), an out-of-control militarised secret police force (The Streltsy), and, in the distance, the trumpets herald the arrival of the legendary reformer, Peter the Great. Watching all this are the bewildered and ever stoical Russian people. Finally, Janáček’s setting of Dostoevsky’s autobiographical account of his experiences in a Siberian prison remind us that violence and the suppression of freedom have remained one of the essential levers of Russian government.

“This season perhaps sounds like hard work, but believe it or not these are three of the finest operas ever written: suffering makes great opera!”

During the Autumn season, there will also be two performances – including one matinee – of WNO’s acclaimed production of Die Fledermaus, this time conducted by James Southall.  Die Fledermaus will transport audiences to early 1900s Vienna in a production that revels in the humour and frivolity of the story, and is full of opulence, fancy frocks and lavish detail.  Featuring a rich and romantic score by Johan Strauss, we join the characters at a masquerade ball as a plot around mistaken identity unfolds.  Die Fledermaus will be sung in English with translation by David Pountney and dialogue by John Copley.

Also joining the cast in the role of the jailer, Frosch, is Welsh actor Steve Speirs.  Better known to some as Alan in the Sky One series Stella, Steve has appeared in TV shows including Extras, Doctor Who and Miranda, and has also appeared in feature films including Star Wars Episode 1: The Phantom Menace and Pirates of the Caribbean: Dead Man’s Chest.

Alongside the season, WNO will continue with a new programme of Youth and Community activity which is intended to engage and inspire.  This will include a new programme extending our work with primary schools in Birmingham, working with four new schools on a regular basis to increase opportunities for young people to get involved in music, singing and the arts through weekly sessions with WNO professionals.  Taster sessions for a new Youth Opera which will begin in earnest from early 2018 will also take place during the autumn.  There will also be Access All Arias events in Birmingham, which are live pop-up performances from members of WNO Chorus. Four will take place in a public location and another four will be at local schools.  Both will use music from Die Fledermaus.

During the Autumn season, WNO’s free virtual reality (VR) experience, Magic Butterfly, will visit Birmingham between 30 October – 5 November and will be situated at Birmingham Hippodrome Square.  Magic Butterfly uses VR to re-imagine operatic scenes from Madam Butterfly and The Magic Flute and create an immersive experience using responsive animation and sound.  Magic Butterfly opened to a great response in Cardiff, and saw over 700 visitors in its first weekend.  It has also been nominated for a 2017 VR Award in the ‘Best out of home VR entertainment’ category.

This autumn will also see WNO launch a competition in partnership with Birmingham Hippodrome for young composers where they will be set the challenge of creating a 10-minute piece on the theme of ‘Uprising’.  The winner will be chosen by an expert panel of WNO composers and will be given the opportunity to create a longer piece for performance by young voices in 2018.  The competition will be launched on the opening night of Khovanshchina at Birmingham Hippodrome on 31 October.