Jason Donovan said: “I’m absolutely honoured to have been asked to take part in the Hippodrome panto, and to work with Michael Harrison once again is going to be a lot of fun. As one of the biggest and best pantomimes in the country I cannot wait to get started with Matt Slack and the team.”

A stalwart of British popular culture for over thirty years, Jason Donovan burst onto British television screens as Scott Robinson on the hugely popular Australian soap Neighbours in 1986, a role which saw him dominate soap land and be involved in some of the most iconic storylines in the show’s history. While still appearing on the show Jason signed a record contract with 80s hit makers Stock Aitken Waterman and raced to the top of the UK charts with his hit singles Nothing Can Divide Us, Too Many Broken Hearts and the duet Especially For You, with his Neighbours co-star Kylie Minogue.

In 1989 Jason released his debut studio album, Ten Good Reasons, which rose to the top of the charts in the UK and his native Australia, leading to extensive world tours and featured vocals on Band Aid II’s Do They Know its Christmas.

Jason made his stage debut in 1991, performing in the lead role of Andrew Lloyd Webber’s Joseph and the Amazing Technicolor Dreamcoat at the world-famous London Palladium, which led to his third UK number one single, Any Dream Will Do. Since then he has starred in Chitty Chitty Bang Bang (again at the London Palladium), held the title role in the UK tour of Stephen Sondheim’s Sweeney Todd, played Tick in Priscilla Queen of the Desert at the Palace Theatre (a role which he also reprised on its first UK tour) and played Captain Von Trapp in The Sound of Music.

On television Jason came third in the sixth series of ITV’s I’m a Celebrity…Get Me Out of Here!, and the ninth series of BBC1’s Strictly Come Dancing, where he reached the final. In 2012 Jason released the album Sign of Your Love, became a DJ on Heart Radio and Heart 80s and most recently co-produced the current UK tour of Priscilla Queen of the Desert.

In the summer of 2019 Jason returned to the London Palladium in the celebrated revival of Joseph and the Amazing Technicolor Dreamcoat, this time playing the Pharaoh opposite Jac Yarrow and Sheridan Smith. Due to overwhelmingly popular demand, Jason will reprise the role at the London Palladium this summer for producer Michael Harrison.

Qdos Entertainment Managing Director Michael Harrison said: “Without doubt Jason is going to be an absolute natural in pantomime thanks to his undeniable showmanship and quick wit. Having worked with him on the recent revival of Joseph I have seen first-hand just what a star he is and I can’t wait for him to experience the magic of a Hippodrome audience.”

Fiona Allan, Birmingham Hippodrome Artistic Director and Chief Executive added; “Every year we strive to bring Birmingham audiences a spectacular pantomime featuring some of the biggest and best names in entertainment. Jason Donovan’s pantomime debut is a huge coup for Birmingham and the theatre, we look forward to welcoming audiences this festive season for what is sure to be the greatest show on earth.”

Goldilocks and the Three Bears marks Jason’s first ever pantomime role, where he will play the Evil Ringmaster, the rival circus owner who threatens to bring down Dame Betty Barnum’s Big Top and steal the loveable three bears. This year’s production marks the first time the circus-themed pantomime will have been performed at the Hippodrome since 1997, with set, scenery and special effects from Palladium last Christmas’ London Palladium production.

Goldilocks and the Three Bears will be produced once again by Qdos Entertainment, the team behind Birmingham’s annual festive production, in a production packed full of jaw-dropping special effects and circus skills, stunning song and dance and the usual hallmark of Hippodrome hilarity.

With tickets already on sale, and with further casting to be announced, audiences should roll up, roll up to join the circus, and be swept away by the spectacular family pantomime that’s just right at Birmingham Hippodrome! 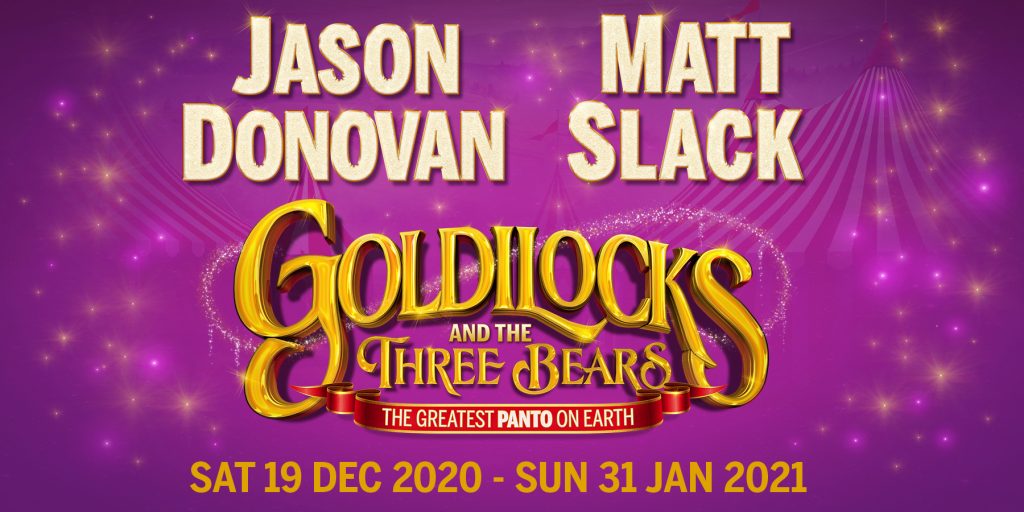