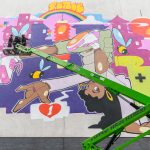 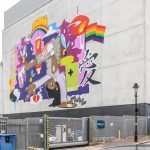 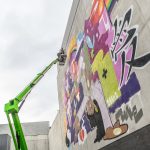 Birmingham Hippodrome and The Southside Building have unveiled a spectacular new mural as part of this year’s B-SIDE Hip-Hop Festival celebrations.

We partnered with The Southside Building, a new creative office space, to commission a large scale artwork by renowned Birmingham based graffiti artist Zuke that champions creativity and expressive art.

The Southside Building was refurbished by Paloma Capital to provide a range of spaces designed to appeal to the creative, media and tech industries and bring businesses and individuals together, from start-ups to established firms. Its shared passion for expression and culture was a key driver in its decision to support Birmingham Hippodrome’s B-SIDE Hip-Hop Festival.

Jeremy Thiagarajah, Paloma Capital, said: “The new mural is fantastic. We are passionate about ensuring that local talent, businesses and individuals, such as Zuke, have access to an engaging environment in which their creativity can thrive. To team up with the Birmingham Hippodrome to provide this opportunity is extremely rewarding.

“Our mission with the Southside Building was to provide a bold and creative space which has its own unique character and feel. Zuke’s mural expresses that perfectly ”

Installed on the side of Birmingham Hippodrome on Thorp Street, the mural portrays a dancer called Bee Girl, (playing on B-GIRL dancers), alongside messages of peace, love and unity, representing the diversity of Southside. The dramatic artwork is the height of four double decker buses and took a week to paint.

The mural installation is complemented by a new Southside graffiti trail created with B-SIDE Hip-Hop Festival co-producers High Vis Festival and Afroflux. A self-guided trail route is available to download via a QR code on the Birmingham Hippodrome website and social media channels.

Graham Callister, Director of Festivals at Birmingham Hippodrome added: “We are thrilled to unveil our new mural and graffiti trail that celebrates Southside on such a large scale and our outdoor graffiti trail is a great way for people to safely enjoy art and culture in the city.”