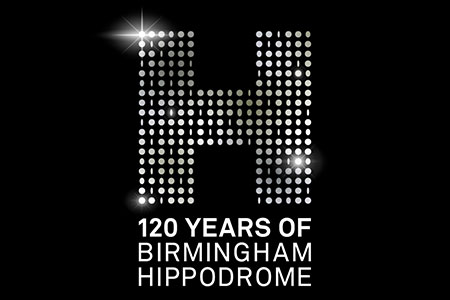 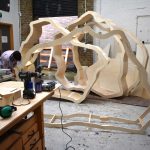 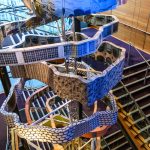 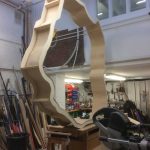 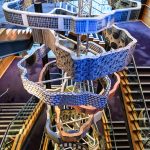 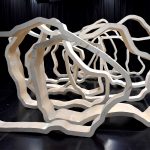 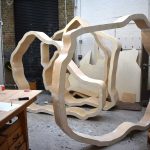 As part of the celebrations to mark Birmingham Hippodrome’s 120th birthday, we commissioned a new site-specific sculpture for our foyers in collaboration with Pangaea Sculptors’ Centre.

Rachael Champion was selected as the winner for her piece ‘Tower of Varieties’ which references the Hippodrome’s original name in 1899 of The Tower of Varieties and Circus and is inspired by Birmingham’s architecture and personality.

These are the 12 buildings featured on the sculpture:

The Custard Factory
The factory was built by Sir Alfred Frederick Bird, the inventor of eggless custard in 1906. Bird’s left the site in 1964 and today it is home to 145 business units for use mainly by artists and designers.

The REP
The origins of The Rep go back to 1913 with the opening of Britain’s first purpose-built repertory theatre in Station Street. In 1971, the company moved to a new 825 seat theatre on Broad Street.

Selfridges
Selfridges is part of the Bullring Shopping Centre which was completed in 2003. It has six floors and the facade comprises 15,000 anodised aluminium discs mounted on a blue background.

Moseley Road Swimming Baths
A Grade II* listed Edwardian swimming pool which opened in 1907 and has been at the heart of the Balsall Heath community ever since. The pool is now in the hands of the Moseley Road Baths Charitable Trust who are planning a future for this magnificent building.

Edgbaston Cricket Ground
The first match took place here on 7 June 1886 against the Marylebone Cricket Club (MCC), watched by 3,000 spectators. The first permanent stand was built in 1902 for The Ashes test against Australia. The pavilion end on the south side of the ground was redeveloped in 2011, bringing the ground’s capacity up to 25,000.

The Hare & Hounds, King Heath
This pub was originally built in 1820, and was rebuilt in 1907. It is Grade II listed and has retained many original Art Nouveau internal fixtures. The Hare and Hounds was the location of the first concert by UB40 in 1979.

The Rotunda
Originally designed as an office block, The Rotunda opened in 1965 at a cost of £1 million. The Grade II listed building is 81 metres (266 ft) tall. The Mulberry Bush pub in the basement of the building was one of the sites of the Birmingham Pub Bombings in 1974. The building was refurbished in 2008 as a residential building with serviced apartments on the 19th and 20th floors.

Spaghetti Junction
Officially named the Gravelly Hill Interchange, Spaghetti Junction was constructed between 1964 and 1972. It is Junction 6 of the M6 motorway where it meets the A38(M) Aston Expressway. The junction covers 30 acres, and it has 559 concrete columns, reaching up to 24.4 m (80 ft).

Aston Webb Building, University of Birmingham
The building is named after one of its architects and is at the centre of a semi-circle arranged around the Joseph Chamberlain Memorial Clock Tower. The original campus was built between 1900 and 1912.

Text by David Humphries (Heritage Volunteer), 2019.
Images show the work in situ and in progress in Rachael’s studio.