The Voyage was funded by Arts Council England, Legacy Trust UK and supported by Dancing for the Games. The Voyage was also in partnership with Town Hall Symphony Hall Birmingham, Birmingham City Council and Birmingham Conservatoire. For a full list of partners CLICK HERE. 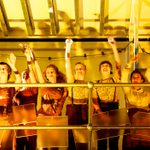 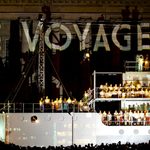 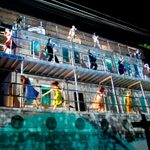 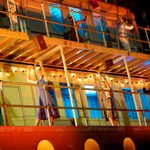 In the middle of June 2012, an enormous ship sailed into the centre of Victoria Square, Birmingham, docking itself beside the city’s Town Hall. High above the people who gathered to look at this marvel, dancers and aerialists appeared in the ship’s rigging… The Voyage had begun.

Professionals joined forces with a huge amateur choir, live musicians and more than 140 community performers to transform the Square and tell an engrossing story to over 15,000 spectators over three nights.

The action unfolded onboard the ship as seagulls swooped and travellers prepared to embark on their individual journies of discovery. The ship set sail, the Town Hall was transformed by spectacular projected imagery and the city’s skyline became a dream of undiscovered worlds…

This outdoor multimedia spectacle was created by Motionhouse, one of the UK’s foremost dance theatre companies, and world-renowned physical theatre company Legs On The Wall, from Australia.

The Voyage was produced by Birmingham Hippodrome with original film projections from award winning Logela Multimedia.