Produced by XTRAX
Co-produced by Without Walls
A TippingPoint/Without Walls Co-commission
Commissioned by Brighton Dome and Festival and Norfolk & Norwich Festival
Made in Liverpool supported by Liverpool City Council
Co-commissioned by Greenwich+Docklands International Festival, Mintfest, Stockton International Riverside Festival and XTRAX
Supported by the National Lottery through Arts Council England 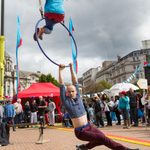 4 Squares Weekender was a major outdoor celebration on 6 – 8 Sep 2013 for the opening of the Library of Birmingham, presented by Birmingham Arts Partnership (BAP), the consortium of leading arts organisations and venues in the city.

It featured FREE outdoor performances by UK and international artists, appealing to the whole family, including pop-up performances by the CBSO, aerial and acrobatics by NoFit State Circus, appearances by Birmingham Royal Ballet, the Drum’s music showcase Simmer Down, plus street theatre, dance, live music and exhibitions.

On Fri and Sat evenings, 4 Squares Weekender culminated in a FREE large-scale spectacular show As The World Tipped by Wired Aerial Theatre. Combining dramatic film and visuals with breath-taking aerial performance and stunning choreography, As The World Tipped confronted one of the most pressing issues for the planet with spectacle, humour and emotion.

“This outdoor show is a lot more than mere spectacle. It does that rare thing – it makes you gulp with astonishment, but also think.” The Stage

Written and directed by Nigel Jamieson, one of the world’s leading creators of outdoor spectacle (Sydney Olympics, Liverpool Capital of Culture), As The World Tipped was created by the pioneering Wired Aerial Theatre, is produced by XTRAX and was presented by Birmingham Hippodrome.